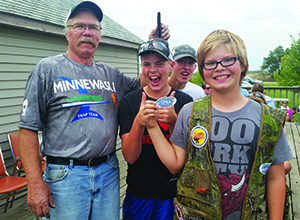 The first year for the Minnewaska trap team is now history. The team competed in both a spring and fall season and had good participation numbers and results for both. The team is open to both boys and girls and was well represented both in gender and age, with students from grade seven up to seniors shooting for the Lakers.

The coaching staff consisted of Jennie and John Stone, Rob Richards and Don Rundquist. The coaches worked with the students that came to them, comprising the entire spectrum of shooting experience, from seasoned to novice.

Members of the team were asked about their thoughts on the trap team. Call it “the view from the 16-yard line,” the distance from the shooter to the traphouse.

“Trap shooting is not your run of the mill team sport. We compete against our teammates, other clubs and ourselves. We are entrusted to handle ourselves and our firearms with the ultimate respect and safety. With great mentorship I’ve learned to clear my mind, keep my head down and cheek on the stock,” said Addison Olness.

Carson Tauber said, “I love shooting and all the people I have met are so helpful. The coaches are the greatest and always make it fun. I have learned discipline and how to do a difficult sport.”

Sam Pfeiffer related her thoughts. “It was my first year on the team and to say the least, I was very impressed. Everyone was very inclusive and responsible, even the younger guys. It was such an amazing experience and I can’t wait until next spring.”

“What I like about being on the trap team is that everyone participates!” Natasha Nemmers said. “No one is sitting on the ‘bench.’ We shoot two rounds individually so we can strive to reach our personal best, but then the scores are combined to give us a team score, emphasis on team, each week. Having the privilege to participate in the state shoot last spring was a highlight for me, but the end of the year family fun shoot was definitely my favorite memory. We get to shoot with family and friends of all ages and skills.”

Tyler Hagen added, “I learned to always keep trying and trying, to never give up. The key is practice. I never gave up. One of my biggest accomplishments is averaging 20 or more and, of course, the 25 straight I shot. The number one key is that a team is always a team, to work together to accomplish team goals.”

“My favorite part of the trap season was how nice the team and coaches were to me. They gave me pointers on how to shoot and on my stance. They made me feel like a part of the team,” said Joseph Piekarski

“I really enjoy practicing with the team and seeing my teammates build their confidence and skills,” said Kaleb Drewes, one of the team’s top shooters.

Lynn Schnobrich gave a parent’s perspective on the trap team, “The MAHS trap team is a welcomed addition to the MAHS sports offering. It offers an opportunity for the students to participate in an individual as well as a team sport, with little emphasis on age, gender or ability. The coaching staff has done a phenomenal job of teaching the students proper gun handling and shooting techniques while focusing on safety, concentration, sportsmanship and having fun. It has been great to see several of the team members improve considerably in both skill and confidence.”

Coach Jennie Stone said, “I get goose bumps every time a parent, school board member, school administrator, local businessman, or citizen stops me and thanks me for getting this program going at MAHS. It is because everyone was excited about this great opportunity that we have trap shooting. The coaches just did the organizing, but the community has welcomed us. We were able to see these kids change and blossom. I can’t tell you how many times I have heard how grades have improved, attitudes have changed and confidence has grown because of being on this team. Some of these athletes have never, and would never be, on another school team. This allows them to be part of the Laker Nation and the pride that gives them is irreplaceable. That is what this is about. We are here not to just teach a sport, but to change lives. I truly feel we are doing that.”

Everything athletics is supposed be, all that is hoped for, was on display this year in the sport of trap shooting. Congratulations to the coaches and students who put in the time and the hard work to get the program off the ground.

The scoreboard was not unkind to the Lakers, who finished sixth in a nine-team spring league and sixth in an eight-team fall league, despite having many novice shooters. Even the experienced shooters had to perform under a new form of pressure and learn to be part of a team.

With year one now history, the returning members of the team and the coaches are looking forward to spring and the challenge of continuing to build the Minnewaska trap team program.