With trapshooting established on the high school scene, students on the forefront savor its benefits. 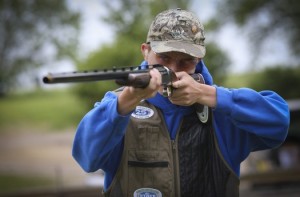 Senior Tom Koppe, who posted a perfect score at sections two weeks ago, joined the Hopkins trapshooting team when he was a seventh-grader. Photo: Renee Jones Schneider, Star Tribune.

Tom Koppe, a recent Hopkins graduate, heard such stereotypes of him and fellow members of the school’s decade-old trapshooting team. None of those shots, however, shattered his enjoyment.

“Some of the kids think we all drive trucks,” Koppe said. “I drive a Prius.”

Koppe and the Royals competed last weekend at the second annual clay target state tournament at the Minneapolis Gun Club in Prior Lake. A total of 31 teams of five competitors and two alternates competed at the event. An additional 100 individual competitors also took part.

The event marked the end of high school trapshooting for Koppe and recent graduates Colton Sveningson of Coon Rapids and Michael Winkey of Blake. All three took different paths to trapshooting, a maturing high school sport boasting more than 8,600 participants in Minnesota.

Koppe learned he could earn a participation letter in trapshooting at Hopkins and joined as a seventh-grader. Sveningson, who was cut from the Coon Rapids baseball team as a sophomore, endured the pain of a quiet spring before joining the trapshooting team as a junior. Winkey, a member of Orono’s trapshooting team, transferred to Blake and started a program at the Minneapolis private school as his senior project. 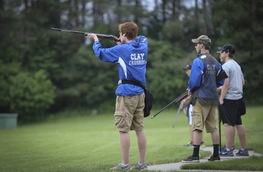 Austin Knapp, front, and his Hopkins teammates prepped for the second annual clay target state tournament. The Royals were one of 31 five-member teams to participate in the event. Photo: Renee Jones Schneider, Star Tribune.

Blake became one of about 70 schools to sanction trapshooting this school year, pushing the total to more than 400 throughout the state.

“The big reason I think trapshooting has grown is the fact that all genders and people with disabilities can do it,” Winkey said. “You don’t have to be particularly athletic and everyone participates equally.”

Koppe and Sveningson, meanwhile, grew up hunting. They competed alongside teammates with various levels of experience.

“Hopkins is not exactly an outdoorsmen community,” Koppe said. “So it was a good way to meet people with common interests.”

Trapshooting was a constant for Koppe throughout high school. The sport provided Sveningson a vehicle for building new connections after baseball ended.

“Sophomore year definitely was sad because pretty much all my friends were through baseball,” Sveningson said. “Once I joined the trapshooting team, I met new friends so it was a great way to end my high school career.”

Both Koppe and Sveningson competed at state last week. Koppe, who shot a perfect score two weeks ago at the section competition, placed first among the Royals shooters. Sveningson took third for Coon Rapids.

Trapshooting brought enjoyment to Winkey’s Orono experience, so he brought trapshooting to Blake. He said “safety was a major concern” shared by administrators but none discouraged the idea. The team drew 17 students. Several others heard about the team too late or could not get a permit in time for the deadline.

“That gives me hope the team will continue to be there in the future,” Winkey said.

Tartan sophomore Maren Iverson also seeks big things down the road. An avid hunter growing up, she followed older brother, Kendan, onto the Titans’ trapshooting team. Sable estimated “17 to 18 percent” of all high school participants are female. Iverson, a club swimmer who also ran cross-country and track for Tartan as a freshman, was the Titans’ only female among the 17-person trapshooting team.

Her deer and turkey hunting skills did not fully prepare her for the fundamentals of trapshooting. She learned a lot about footwork, tracking a target moving about 40 mph and knowing when to shoot. She did not qualify to join her Tartan teammates at state this spring but hopes to be there in the future.

“It’s a great team sport because you push each other to be better competitors,” Iverson said.