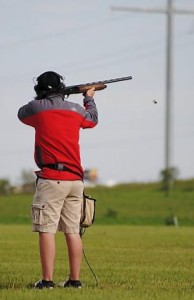 A shell ejects from the shotgun of Brady Ballis, 17, of White Bear Lake, Minn., while he competes in the 2015 high school trap shooting championship in Alexandria, Minn., Monday, June 15, 2015. Ballis, a junior, competed on White Bear Lake High School’s varsity team as part of the June 11 to 16 state championship. The event served as a qualifier for the state tournament of the Minnesota State High School Clay Target League, which will be held Saturday, June 20, at the Minneapolis Rod and Gun Club in Prior Lake. (Photo courtesy Molly Ballis)

Several hundred high school boys and girls will compete Saturday in Prior Lake for the state individual and team crowns in trapshooting.

The second annual State Clay Target Tournament sanctioned by the Minnesota State High School League serves as showpiece for the sport, which has exploded in growth in its short history and is now becoming a model for the nation and possibly a proving ground for Olympic hopefuls.

Trapshooting involves shooters firing shotguns at clay discs that are mechanically flung into the air, much like a bird flying away. Bird hunters shoot trap — and its relatives, skeet, five-stand and sporting clays — as practice for hunting season.

But both trap and skeet have long histories of international competition in their own rights, and both are well-established summer Olympic competitions.

The Minnesota State High School Clay Target League was formed in 2000 as a way to increase use of local gun clubs, which have seen their membership age and dwindle. The nonprofit organization subsisted on three teams for nearly a decade until it began to expand, more than doubling almost every year from 2008 to 2012.

This spring, some 8,600 students from roughly 450 schools competed, putting the popular spring season (there is also a fall season) on par with traditional high school sports.

Jim Sable, the founder and executive director of the Clay Target League, chalks up some of the high participation rates to Minnesota’s large number of hunting families, but he notes that many athletes, especially those from the metro, come from nonhunting families.

Another aspect that allows high participation, Sable said, is that regular-season matches are conducted remotely, allowing flexible schedules and eliminating travel needs. Team members shoot, usually at a local gun club, at moving clay targets and record their scores; their opponents do the same at their own local range. Scores are compared to determine the winner.

“We have a lot of guys who are football or cross-country runners and trapshooters in the same season,” he said.

If the past weekend was any indication, dedication of parents, coaches and athletes shouldn’t be underestimated. The statewide qualifiers for Saturday’s event were held June 11-16 in Alexandria and drew more than 5,000 student-athletes and about 20,000 spectators, mostly relatives and siblings.

“It’s gotta be one of the few times Alexandria ever gets traffic jams,” Sable said.

Sable believes the event would qualify as the largest high school trapshoot in the world, a notion that couldn’t be verified — or refuted.

As such, Minnesota’s model has drawn attention from neighboring states. Last year, Wisconsin held its first statewide high school championship, and North Dakota held its on June 13. Sable said he has received inquiries from 14 other states considering establishing leagues, and representatives from several of those states traveled to Alexandria to see the spectacle.

“A lot of people don’t believe our numbers,” said Sable, who lives in Plymouth. “They needed to come and see it for themselves.”

Sable has renamed the Inver Grove Heights-based organization the USA High School Clay Target League, and he said his pitch to other states is to simply form their leagues under the umbrella of the organization he founded, which has reported no shooting-related injuries.

“Why reinvent the wheel?” he said, noting that his league has developed an electronic scoring system that allows teams to monitor shooting results via smartphones. “We’re big enough now that we can get their website and scoring system up and running right away.”

Expansion continues in Minnesota as well. Sunday will feature the first statewide high school skeet competition, a sport not currently sponsored by the MSHL.

So does Sable see the League becoming some sort of farm system for Olympians?

“You hit the nail on the head,” he said. “And if you see the scores some of these kids are posting, you’d understand.”

Last year, four shooters scored 100 out of 100 in the sectionals, the maximum score possible.