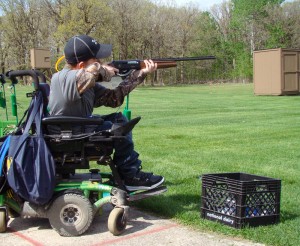 Compared to the challenges the Lincoln High School junior has faced in his 17 years, broken glasses are a minor inconvenience.

To prove it, Erickson proceeded to shatter a couple of targets without his glasses.

A member of the Thief River Falls trapshooting team in the burgeoning Minnesota State High School Clay Target League, Erickson shoots from a wheelchair. Born with spina bifida, a birth defect in which the spinal cord doesn’t develop properly, he has proven that trapshooting is a sport anyone can enjoy.

And enjoy it he does—even when he breaks his glasses after getting the stock of the shotgun too close to his face.

“Love it,” said Erickson, a first-year trapshooter on the team. “It’s fun.”

And no, he says, he doesn’t get mad if he misses.

“When I first started, maybe,” he said. 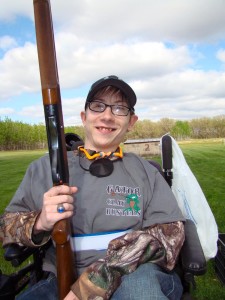 For the past three weeks, father and son have been at the trapshooting club every Tuesday and Thursday afternoon so the younger Erickson can hone his shotgun skills and have some fun with classmates in the process.

A warehouse manager at Slumberland in Thief River Falls, Dwight Erickson leaves work early the two days to drive his son to the trapshooting range a few miles northwest of town. They’ll continue the routine until the program wraps up its six-week run later this month.

Avory shoots 50 rounds each time, and every target he breaks goes toward the trapshoot team’s total score.

“I get excited every week just to see how he’s going to do,” his dad said. “I told him, it doesn’t matter how many you get—just a personal best is what you need to do.

“He’s been enjoying himself immensely,” Erickson added. “I’ll do it until it’s done. He wants to keep going every year now, so it will be something we’ll do together.”

A newcomer to trapshooting, Avory Erickson says he shot at a few clay targets at the end of his Minnesota firearms safety training, but it was nothing like the experience he’s getting as a member of the Thief River Falls team.

“As a team, everything is totaled so you’re not going against each other in this sport,” the elder Erickson said. “Every point counts, every bird counts. 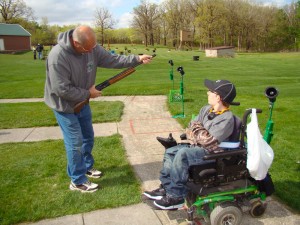 Erickson’s challenges started at birth when he was airlifted to Minneapolis the day he was born in August 1997. Besides a hole in his spine, the boy had a nickel-sized hole in his heart that had to be repaired, his dad said. He also underwent surgery to insert a shunt in his brain.

There’ve been 14 surgeries in all, Dwight Erickson said.

“It’s been a busy 17 years,” Erickson said of his son, who’ll be 18 in August. “But we’ve got a healthy 17-year-old who’s learned to cope with everything that’s been thrown his way.”

Avory, who says he’s wanted to be on the trapshooting team since hearing about it last year, also has gotten some help from the coaches of the Badger-Greenbush-Middle River Gators trapshooting team, which also shoots at the Thief River Falls club.

Luke Novacek of Greenbush, Minn., who coaches the BGMR team with Bryce Evans, also of Greenbush, has loaned Erickson a Franchi 28 gauge shotgun that has less kick than the 20 gauges most of the students use.

Novacek said he learned about Erickson through Al Steinhauer, a member of the Thief River Falls Trapshooting Club who works with the young shooters.

“I talk with Al quite a bit, and he told me there was a kid coming in, and he’d called and asked if a .410 was good enough, and I said no,” Novacek said. “I said I have a 28 gauge that doesn’t kick. I said I will give him the shells, and I’ll even make the coach from Greenbush buy a flat of shells.”

Novacek brought the shotgun to the orientation launching the season for Erickson to try, and the young shooter was sold. He could use the shotgun for the season, Novacek told Erickson, but there were a couple of rules:

“One, the gun has to come out of the case when you get home to prevent rust, and the second rule is you might have to wear a Gator T-shirt,” Novacek joked.

Erickson, being a man of his word, wore a Gator shirt Tuesday afternoon, prompting some ribbing from Novacek. 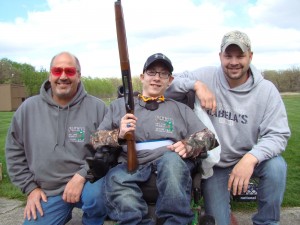 “I said what’s the difference now or later,” he said.

That’s where the broken glasses came into play, a mishap his dad remedied by repositioning the frames on his son’s face. Loose fitting, perhaps, but at least he could see the targets.

“As long as you’re blasting away and having fun, that’s all that matters,” Novacek said.

The significance of that isn’t lost on Erickson’s dad.

“There’s a lot of things (where) it’s hard for us to be able to participate because of his disability,” Dwight Erickson said. “It means a lot to where we can finally, actually, have no limitations in doing something together.

“And they make it so easy out here for that to happen.”