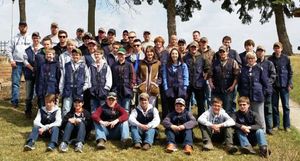 The St. Peter High School clay target trap shooting team — which has attracted 37 players in sixth- through 12th-grade and eight coaches — began practices in the 11-week season Sunday afternoon at Caribou Gun Club in preparation for the first meet at 2 p.m. April 19.

In the first year of the sport in 2008, there were three teams, three schools and 30 athletes total.

The St. Peter team got started when a bunch of members of Nicollet County Pheasants Forever started talking about doing something more for youth in the area.

“They knew my son (Brad) shot for Nicollet, and we started getting organized to approach the school about forming a team,” Boyer said. “One of the stipulations from the state clay target league is that you have to have the schools approval. Several members of PF and a few others got certified by the DNR to become firearms safety instructors and then started having firearms safety classes.

“We polled the students at the school about interest and had about 50 kids express that they would be interested. We talked a lot to Skip Hoffman, the coach at Nicollet, about how they were set up and sort of patterned ourselves after them. Once we had all the specifics in place, we had an organizational meeting for parents and then began signing kids up.

“Really it was just a bunch of men and women who believe in the positives of shooting sports and proper firearms training. They all just put in their own time and money to get this going. Once we were on the way, we went out into the community and talked to businesses and individuals about community support. We are now about 20 sponsors strong and are organizing a booster club to promote the sport even more.

“What I like about the sport is that it teaches discipline and self reliance. It also lets kids compete in something they obviously love to begin with but have never had an opportunity to actually compete in. It is also a true team sport. You shoot individually, but every score counts so in that aspect it is like swimming, tennis, golf, wrestling etc.”

Of the 37 athletes on the team, about eight or nine are involved in other spring sports, since they shoot on Sundays and are not considered a “major sport” at the school they can still be in other things.

About half the athletes participate in other school sports the rest of the year ranging from golf to football to swimming. The other half prefer hunting in the fall to school sports or maybe only have weekend time for extra curricular activities.

With a first-year team, Boyer is unsure about the prospects for this season.

“It’s really hard to guess how we will do competitively,” Boyer said. “Several teams are in their fourth or fifth year.

“To my knowledge, we only have one athlete who has competed in the clay trap league before. Brad Boyer shot for Nicollet High School the last two years. Some have shot competitively before, but only one in this league.

“It will be interesting to see how we do considering how young our team is overall,” Boyer said. “Really we are just happy to have a team and really pleased by the support we have gotten from community members and the school.

“We take no money from the school at all, and each athlete has to pay a substantial fee, but hopefully we can get that reduced in the future. All of our coaches are volunteers from the community who wanted to support kids interested in a shooting sport.”

St. Peter will be shooting all of its matches at Caribou Gun Club in Le Sueur, “and they have been a huge supporter,” Boyer said.

All of the matches are shot at the home course, and scores are entered on-line. Unlike other sports, all the scores will count toward the team total, and each athlete on the team competes every week. Also unlike other sports, trap shooting is co-ed.

“We have two female competitors on our team and 35 male, but I think that will increase rapidly in the coming years,” Boyer said. “With two-thirds of our team freshman or younger, I think this team will only continue to grow and get better.

“A few things we would like people to know is that safety is our No. 1 priority. All members must have their firearms safety certificate, and there will be no firearms ever brought to the school. All the meets take place at a shooting range with certified firearms instructors present.”