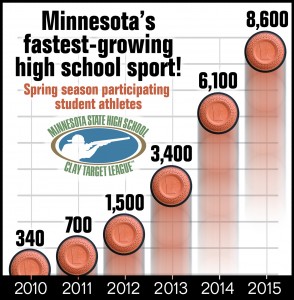 The Minnesota State High School Clay Target League (MSHSCTL) will host more than 8,600 registered student athletes representing 243 trap shooting and 25 skeet shooting high school teams for the 2015 spring season. Led by the support of their schools and more than 2,400 volunteer coaches, thousands of student athletes will participate in shooting sports weekly April through June at more than 150 shooting ranges throughout Minnesota.

“Last year, 6,100 student athletes participated in the spring league,” said
Jim Sable, Executive Director of the MSHSCTL. “With the addition of 83 new teams, the expansion of existing teams, the increased capacity of shooting facilities, and the addition of the new spring skeet league are some of the factors attributing to the continued success as Minnesota’s fastest-growing high school sport since 2008.”

The clay target league is also the safest sport in high school. Since 2001, the MSHSCTL has no reported injuries or gun-free zone violations at school.

Upon completion of the spring league, all trap shooting teams are invited to participate in individual and team competitions at the 2015 MSHSCTL Trap Shooting Championship at the Alexandria Shooting Park in Alexandria, Minnesota scheduled for June 11-16. “With an expected 20,000 attendees including more than 5,000 student athletes, this tournament will be the largest shooting sport event in the world” Sable said.

The USA High School Clay Target League is a 501(c)(3) non-profit organization and operates the Minnesota State High School Clay Target League as the independent provider of shooting sports as an extra curricular co-ed and adapted activity for high schools and students in grades six through 12 who have earned their firearms safety certification. The organization’s priorities are safety, fun and marksmanship – in that order.