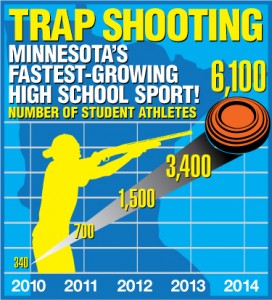 “In 2010 the League had 340 participating student athletes,” said Jim Sable, Executive Director of the MSHSCTL. “By almost doubling the League participation this year, more schools and their student athletes are discovering how fun and safe shooting sports really is,” Sable said. “Since 2001, the League has no reported injuries or school gun-free zone violations and it is the only co-ed and adaptive sport in high school.”

The Minnesota Department of Natural Resources has approved nearly $400,000 in expedited small range trap shooting grants to expand, improve or upgrade trap shooting ranges across the state. The grants are the result of a $2.16 million legislative appropriation earlier this year that aims to increase shooting range capacity for youth trap shooters by providing matching funds to recreational shooting clubs open for public use.