High school trap shooting teams have sprouted up across the state and with it an increase in demand for time and space at gun clubs.

The sport has continued to grow in the state with more than 10,000 student athletes expected to compete in the 2015 league. The Minnesota State High School Clay Target League, which started in 2000, doubled its participation numbers from a year ago this fall. This fall the league will host 1,770 participants from 68 high school trap teams and 13 high school skeet shooting teams.

The rising interest at the high school level is fueling investment in gun clubs around the area.

The Hampton Sportsman Club and the Morristown Gun Club have been among the beneficiaries of the rise in interest at the youth level. Both clubs have worked to create more opportunities for youth to participate in the sport by adding trap houses and throwers recently and are among a trend across the state.

The Hampton Sportsman Club hosts the Randolph High School clay target team and the Dakota County 4H shooting sports, while the Morristown Gun Club serves as the competition ground for the Northfield, Faribault and Waterville-Elysian-Morristown teams. Each club has invested in upgrades to keep up with the growing demand. 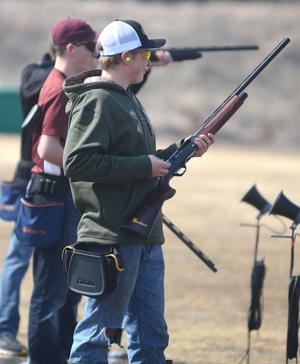 The high school trap shooting teams have given youth an opportunity to compete collectively at one place in a sport that many in the past partook in smaller groups away from gun clubs. It’s now the fastest growing sport in the state.

An aging membership base at clubs had some concerned about the future of the sport.

Quiring became a member of the Morristown Gun Club when he began coaching the Northfield team last year and helped spearhead investment in the club.

“There wasn’t a lot of revenue being generated to keep the lights on,” Quiring said.

The Morristown Gun Club has renovated its clubhouse since the influx of high school participants and has applied for a grant through the DNR to build another trap house.

“It is a challenge to find locations to shoot,” Quiring said.

The Hampton Sportsman Club recently added a second trap house to help meet the demand and plenty of other clubs have waiting lists for new members.

“As the growth of all these high school teams came about, we felt it was necessary to give,” Hampton Sportsman Club treasurer and Hastings High School coach Darin Berg said. “We expanded so we could dedicate that space to high school kids and 4-H kids when they came out.”

Northfield had 62 members on the team in the spring season and Quiring expects that number to grow to around 70-80 in the future. Faribault has similar numbers, he said.

The Northfield School District voted in May to approve the clay target team as a school-sponsored activity so athletes can receive a letter in the sport now. The Minnesota State High School League sponsored a state championship for the first time this spring, but it will not be included in the league’s handbook of official varsity sports. The MSHSL hasn’t adopted it as an official varsity sport because competitions take place on Sundays and the MSHSL does not allow Sunday competitions.

The team attracts both those who have experience with shooting and those who are new to the sport. The cost is $160 through Northfield Community Services and participants must possess a Minnesota firearm safety training certificate to participate. The season runs for six weeks in the fall and picks up again in the spring.

“The popularity has always been there, there just wasn’t a forum to show that popularity,” Quiring said.