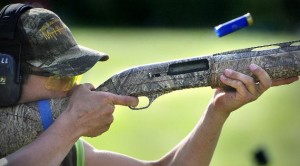 On Saturday, the Minnesota State High School League (MSHSL) will hold the nation’s first school-endorsed trapshooting state tournament, at the Minneapolis Gun Club in Prior Lake. That is a gold star for the state and for this emerging sport.

Young students — boys and girls — who are learning to shoot have gained support from school and state officials. Students arrive eager to compete. Parents and other adults strongly recognize the value of knowing how to shoot well and handle firearms. They also know that personal discipline in using guns will transfer to other areas of life.

Jim Sable, executive director of the Minnesota State High School Clay Target League, led the development of the sport in schools for more than a decade in order to see it become a varsity sport. Sable also worked to develop trapshooting teams in neighboring states. Experienced shooters from the Plymouth Gun Club, which operates on membership volunteer work, strongly support Sable.

Skills are needed, and Sable teaches them. Size is not one of them, nor does a shooter have to be strong, agile or fast. The sport requires skills to repeatedly point a shotgun, fire and break a circular, 4½-inch orange disc hurled through the air at 41 miles an hour. Trapshooting is a game of movement, action and split-second timing. It requires good eye-hand coordination and concentration. Personal self-control, discipline, courtesy and steadiness are also needed.

There has been surprising success in forming teams. Orono schools fielded the first through the school’s outreach program. Then came Wayzata and Minnetonka. Now more than 380 schools are involved, with more asking to participate. Sable’s early supporters of trapshooting as a varsity sport included Craig Paul, Wayzata High School principal, who referred him to Dave Stead, executive director of the MSHSL. Significant support came from the MSHSL, which recognized the personal growth value in competitive trapshooting.

Trapshooting is the only high school sport in which girls and boys compete together on teams. It is also open to students with disabilities; some competitive events have a wheelchair category. The shooters get athletic letters and have their pictures in the yearbook, Sable said. The Plymouth club awards an annual $1,000 scholarship to a graduating senior shooter from Wayzata High School, which is adjacent to the club. Eleven seniors, including young women, have received the award.

The formation of a gender-inclusive sport is not unusual in Minnesota. The state formed the first girls’ high school hockey teams, and the first girls’ state high school hockey tournament was held in 1995. Now women’s hockey is an Olympic sport. Other states are certain to use Minnesota as a model to develop high school trapshooting. This is a sport that teaches young people important things. But it also can be a lifetime sport, with participation from adolescence to old age — even into one’s 90s.