Fast-growing trapshooting teams are yielding top shooters as well on the eve of a first-of-its-kind state tournament. 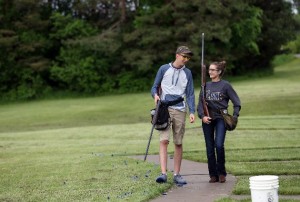 The competition at the Minnesota Gun Club in Prior Lake will bring together the best of a rapidly growing number of students participating in the sport at the school level.

More than 6,100 students from 380 Minnesota schools participated in the Minnesota State High School Clay Target League this spring, according to Jim Sable, the league’s executive director. That’s up nearly 2,000 students from last year and more than 6,000 from 2009.

Twenty-four teams and 104 individuals will compete for state championships Saturday. St. Michael-Albertville will send a state-high eight individuals to the tournament, including the top male and female shooters in the state this spring, Tommy Mavencamp and Emma Olson. Many teams will send one or two individuals, however.

Here is a look at three metro-area schools that will be represented at the competition.

Running to join in Apple Valley

Apple Valley coach John Miller had modest expectations when he approached the school’s principal in December 2011 about starting a trapshooting club.

Miller said he was hoping to get about 25 to 30 students to sign up over the course of two weeks. But after about 15 minutes, the principal called to tell him that about 35 kids had signed up.

“He mentioned that there was so much excitement initially that kids were literally running down to sign up for it,” Miller said.

Apple Valley’s trapshooting team has grown more popular since that first season. More than 50 students have participated in each of the past two years, including 54 this spring.

The team’s growth has paralleled its success. Apple Valley’s varsity squad finished 12th out of 87 teams at the 2013 state tournament in Alexandria, after finishing 26th in 2012.

This spring the Eagles will send senior Ryan Hill and freshman Kory Miller to the state tournament. Hill hit an average of 23.1 out of 25 targets per round this season, and Miller averaged 23 of 25. The pair helped Apple Valley to a fourth-place finish in Class 4A, Conference 2.

Hill, a captain, has been on the team for the past three seasons and posted the third-best scoring average in the conference this spring. He said he’s hoping to finish in the top 25 at state this season, in part by focusing on staying calm.

Miller has been on the team since his seventh-grade year and hit 93 of 100 targets at the state tournament last season. He said he’s hoping to improve on last season’s finish, also by staying strong mentally.

“I just try not to think about anything,” he said of his approach. “If I do miss a target, [I] just try to get by it, just know what [my] mistake was on that target and then just keep going from there.”

Diversity of talent in Blaine

Like Apple Valley, Blaine’s trapshooting team quickly rose to popularity when it started in spring 2012.

Co-head coach Dan Moon said he expected 25 kids to attend the club’s first meeting. Instead about 100 showed up.

Ultimately 63 kids joined the team that year, a number that has increased each of the past two seasons.

With strong numbers, Blaine has been one of the more successful north-metro teams the past couple seasons. It finished second in its conference and 14th at state last spring and took second in Class 5A, Conference 2 this spring.

Blaine also qualified one individual, senior Braedon Heilman, for the state tournament. Heilman averaged a 22.7 this season, his first on the varsity team. He said he knew things were clicking during the first week of the spring, when he shot a 23 out of 25.

Moon, Dan Moon’s daughter, was Blaine’s top female shooter this spring with an average of 21.8. As a freshman, Moon recalled, she hit three out of 25 targets the first time she tried trapshooting. Since then she’s improved to the point where she recently hit 98 of 100 at an Amateur Trapshooting Association event.

“When I was a freshman I didn’t really know how to focus like I do know,” she said “But after trapshooting it’s a lot better.”

This spring Wayzata will send four individuals to the state tournament, including one of its youngest team members.

Seventh grader Max Bunning, son of co-head coach Steve Bunning, finished tied for the 14th-highest scoring average in the state this spring. Bunning, sophomores Kerri Mueller and Andrew Rhodes and junior Connor Czech will represent the Trojans at the tournament.

Rhodes has experience doing well at state, after shooting the second-highest score there last spring. Despite heavy rain, Rhodes hit his first 50 targets and finished with a 97 out of 100.

Mueller, also in her third year on the team, averaged 22.4 this spring. Last spring she had the second-highest female average in the state at 21.5, but after a subpar state tournament, she has focused on improving on the little things this year, including her shooting stance and mental approach.

“I just knew that I had to not slack off and try hard every time I shot and always practice like it [was] competition,” she said of her approach this season.

Czech, the son of Hopkins coach Mark Czech, had his best season with the team this spring, averaging a 22.6.

“This year I think I just really decided to kind of bear in and focus and was able to kind of get the job done,” he said.

And Bunning, the youngest team member, has been the team’s best shooter since he joined last year as a sixth-grader. He averaged 23.6 this spring and also competes on the Amateur Trapshooting Association circuit.

While Wayzata is one of the rare schools that has a junior-high trapshooting program, Steve Bunning said the high school team’s biggest limitation is that it doesn’t have enough coaches.

Though interest is growing, he said, the high school team is nearing its capacity at about 40 kids.

“We’re going to have to turn away kids,” Bunning said, “or have a lot more adult help at 2:30 in the afternoon.”