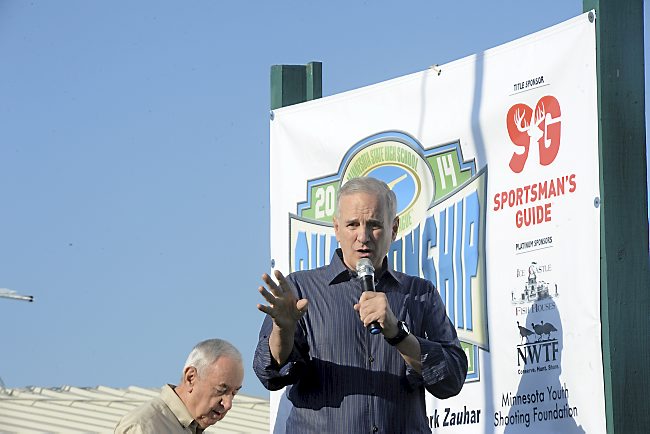 The governor was in Alexandria to take part in the opening ceremonies of the Minnesota State High School Clay Target League’s 2014 championship.

A total of 3,948 high school athletes were registered to shoot over the course of five days. Upwards of 15,000 people are expected at the local park during that time, and it got started with the governor addressing the Class A competitors and spectators on a perfect morning weather-wise for shooting.

“It’s the fastest-growing high school sport in Minnesota — over 6,100 participants,” Dayton said. “It’s just grown exponentially from when it started. Look at it here, 8 in the morning, and this place is just filled with parents and coaches and kids who are learning something they can do for the rest of their life and do responsibly.”

Dayton and the Legislature recently approved more than $2 million in trap shooting sports facility cost-share grants. That will go toward developing or rehabilitating public facilities that provide opportunities for trap shooting across the state.

“To have this kind of space available for kids and adults is really extraordinary,” Dayton said of the Alexandria Shooting Park. “There are parks in other parts of the state where this is not presently available. Having the space is one of the critical features to safe shooting experiences, and this money will help keep people safe.”

The 2014 championship featured Class A teams from around the state Friday, with 2A teams to follow today. The 3A teams will shoot Sunday, 4A teams on Monday, and 5A teams will wrap up the tournament on Tuesday.

The Minnesota State High School Clay Target League featured just three teams and 30 participants from 2001 through 2008. Since then, it has grown to 185 teams from 275 schools and about 6,100 competitors for the 2014 season. Dayton said it’s a testament to how important the outdoors and the future of shooting sports are to people across the state.

“Hunting is a great Minnesota tradition,” Dayton said. “I used to go pheasant and duck hunting in southwestern Minnesota with my father and my brother, and I still have some of my best memories growing up with that experience. The fact this will encourage the next generations to follow in their fathers’ and mothers’ and grandparents’ footsteps is just terrific. It gets them off to a good start and teaches them how to handle a weapon responsibly. It’s just all good.”