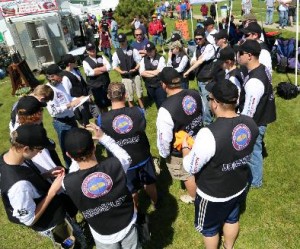 When Kandi Gardner read a newspaper story a couple of years back noting that a neighboring high school had a trapshooting team, she knew her son’s school — Pillager High School — should have one, too.

“So I proposed it to the school and everyone was very supportive,” Gardner said Friday.

As she spoke, her son, Tyler, 18, and the 23 other members of the Pillager trapshooting team were preparing to shoot a round of 25 targets at the Minnesota State High School Clay Target League Championship, a qualifying preamble to the state prep trapshooting tournament Saturday in Prior Lake.

Tyler’s season-long average of nearly 24×25 placed him in a tie for sixth out of more than 6,100 student shooters.

“Last year was the first year I ever shot trap,” he said, adding that he had previously shot sporting clays.

The five-day championship involving students in grades 6-12 runs through Tuesday at the Alexandria Shooting Park, during which about a half-million clays will be thrown. An economic boost to the area, with perhaps more than 10,000 shooters, coaches and spectators attending, the event will also benefit conservation, because a federal tax on guns and ammunition is repaid to states to help wildlife.

Competitive trapshooting now involves more prep students in Minnesota than hockey does and is by far the state’s fastest-growing school sport. It’s the only sport in which boys and girls compete together and alongside physically challenged students.

Not bad for a mix some would presume toxic: kids, schools and guns.

“It’s a great feeling to see all of the kids here,” said Jim Sable, executive director of the Minnesota State High School Clay Target League, which he founded in 2000 after retiring as owner of a marketing and advertising firm.

“But the original idea was as much to save gun clubs by getting more kids involved as it was to start a high school clay target league.”

So successful has the program been in Minnesota that Sable and colleague John Nelson have formed the U.S. High School Clay Target League, and they are expanding the program to other states. A companion league already is underway in Illinois.

In Minnesota, meanwhile, so many kids are involved that about 1,800 were turned away this year, because of a capacity shortage at ranges. A recently approved $2 million legislative grant program is intended to help alleviate the deficiency.

“The problem we had before was that gun clubs were dying because it was mostly old guys who shot,” Sable said. “I surveyed my club, the Plymouth Gun Club, and the average age was 56. Worse, 10 percent of clubs in the state had closed due to disinterest.”

Scott Bauer and his brother, David, of Graceville in far western Minnesota, know the feeling. They, along with Brad Kallstrom of nearby Wheaton, were in Alexandria on Friday, coaching the 18-member Clinton-Graceville-Beardsley High School “Clay Busters.”

It’s the team’s first year, and half of the shooters are girls.

Scott Bauer said the Grace­ville Gun Club — which in the 1950s hosted the state trapshooting tournament — has fallen on hard times.

“We once had nine trap huts,” he said. “Now we have two. One reason we formed the high school team was to keep the club going.”

Technically, trapshooting isn’t a high school sport in the way basketball, football and hockey are, because the latter activities must adhere to Minnesota State High School League rules. These include, for example, a prohibition of practices on Sunday — a common undertaking among high school trapshooting teams.

But for practical purposes, trapshooting is a varsity sport in the 380 state high schools that field teams individually or jointly with other schools.

“We provide recommendations to the schools on awarding letters in trapshooting,” Sable said. “About 70 percent of participants earn a letter.”

Minnesota trapshooting teams don’t travel to compete with other schools, as basketball teams do. Nor are the state’s trapshooting conferences based on geographic location.

Instead, conferences are arranged by school size. So, for example, Lake of the Woods High School in far northern Minnesota is paired with similarly sized Eldon-Conger High School in the south.

Shooting isn’t free, and a student’s estimated seasonal cost is about $350 for shells and range fees, if any. But in many cases, these expenses are offset by donations from local Rotary, Legion and wildlife clubs such as Pheasants Forever chapters.

“Our costs this year averaged about $125 per shooter, thanks to contributions,” Kandi Gardner said.

Because guns are prohibited on school grounds, kids often return home after classes to retrieve firearms before heading to a range. When that proved impractical for the McGregor-Aitkin-Cromwell High School trap team, a local wildlife group purchased a 40-gun safe and gun cleaning station.

Now, with help from the Cabela’s Outdoor Fund, Sable and Nelson hope to spread the program, perhaps nationally.

“You involve a kid age 16 in the shooting sports, and he or she will spend an average of $77,000 in these activities during their lifetimes,” Sable said.

“If we want to save shooting and hunting, that’s what we’ll have to do, get kids involved. And we know from experience that people don’t stop shooting once they start. In 13 years, we’re still waiting for our first student to drop out.”