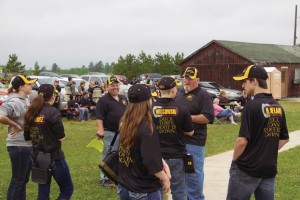 The Blackduck team takes part in the Lumberjack Invitational this past Saturday in Bemidji. (Kristi Coughlon | Special to the Pioneer)

The Bemidji High School Clay Target Team wrapped up its first season by hosting the “Lumberjack Invite” this past Saturday at the Bemidji Trap and Skeet Club in Bemidji. Schools from Blackduck, Roseau, International Falls, Warroad, Detroit Lakes, Walker and Pequot Lakes participated in a competitive, fun shoot. More than 300 spectators, as well as participants and coaches packed the club’s range to enjoy a day of camaraderie, food and fun.

The top male shooter went to Bemidji’s own Chase Todavich, who shot 97 out of 100. Calvin Nodsle of Detroit Lakes was second and Zackary Byfuglien of Roseau took third. Both shot 95 out of 100 in the initial competition.

The top female shooter was captured by another Bemidji shooter, Anna Fogarty, who shot 89 out of 100. Second place went to Julianna Fernandez of Blackduck, who shot an 80, followed by Bemidji’s Sarah Reed, who scored a 68.

“This is the first year for the Bemidji High School Clay Target Team, and I am grateful for the

support we’ve received from the parents, community and Bemidji High School,” said Bryan Hammitt, Bemidji High School teacher and coach. “We have 48 students shooting on our team, from novice to varsity, and I am proud of them all.” 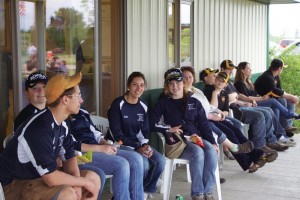 The BHS and Warroad teams take a break during the Lumberjack Invitational this past Saturday in Bemidji. (Kristi Coughlon | Special to the Pioneer)

Hammitt also praised the Bemidji Trap and Skeet Club members for their time and generosity in opening up the club’s facility for the students to practice and compete.

The Lumberjack Invite was a warm-up for the Minnesota State High School Clay Target League 2014 Championship, which starts Friday at the Alexandria Shooting Park in Alexandria, where more than 4,000 students are expected to compete for individual and team achievements. The BHS team will participate and is scheduled to shoot Monday.

According to the MSHSCTL, the championship will be the largest youth trapshooting tournament in the world. A total of 176 Minnesota high schools will compete. The league championship is also the team-qualifying tournament for the inaugural 2014 State Tournament, where 104 individuals and 24 teams will compete June 14 at the Minneapolis Gun Club in Prior Lake. Todavich and BHS teammate Seth Perkins automatically qualified for the individual competition at the state tournament based on their overall scores this season.