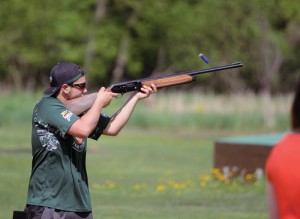 Tyler Montez fires at a target during a recent Park High School trapshooting team competition. In its first year, the team has drawn 50 students. (Bulletin photo by Scott Wente)

With his shotgun held firmly in position, the student trapshooter utters a one-word command.

A bright orange disk is launched into the air, whirling away from the trapshooter.

The student eyes the disk and pulls the trigger, the echoing shotgun blast piercing the morning silence.

A split-second later the disk bursts into two or more pieces — if the shot was on target.

The process is repeated 24 times before another student steps up to take a shot.

So goes the weekly competition for the Park High School trapshooting team at the South St. Paul gun club. The team is wrapping up its first year of competition, and the club sport’s addition to Park’s slate of student extracurricular activities has proven to be a popular success.

There are about 50 kids on the team, both boys and girls. Some are experienced shooters and others are new to the sport.

“We had a lot of kids who started this year who never really did much trapshooting but picked it up, which was fun to see,” head coach Pete Soukup said. Soukup, who lives near Park, agreed to coach after having served as an assistant for the Hastings High School trapshooting team. 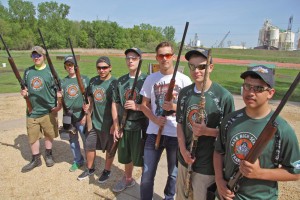 Many of the participants are hunters, and some said they joined to hone their shooting skills for the hunting season. Others signed up because they like shooting trap.

“It’s a great sport to get into,” said Lucas Coy, a junior.

Students pay about $350 to participate. There is a fall shooting league but competition is in the spring. Most of the students have their own shotgun — they use either a 12- or 20-gauge — and Soukup supplies one for any student in need. The participation fee covers the cost of shotgun shells and the targets they shoot over the course of the season. A local Pheasants Forever chapter also has chipped in money to help the team, Soukup said.

Team members shoot on Wednesday afternoons or Sunday mornings at the South St. Paul gun club. A normal league competition includes two rounds of 25 targets. The skill level varies; there are a couple of team members who can hit 23 or 24 targets. 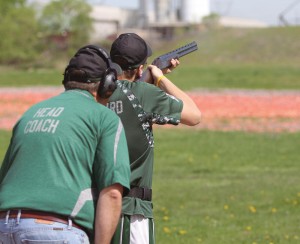 All students must have completed gun safety training. They wear safety glasses and ear protection. There is protocol to follow on the range. Even though they shoot once a week after school, they cannot bring their gun to school.

Park Activities Director Phil Kuemmel said some people may be concerned about the sport and suggest that it encourages violence, but it does not.

“This organization really has things laid out for the opportunity to be very successful,” he said. The activity is governed by the Minnesota State High School Clay Target League.

Team member Tommy Sauro said some of their classmates at Park were skeptical about the sport for safety reasons, but they choose to ignore the naysayers. The kids said they haven’t been injured yet.

“When you look at it, it’s safer than other sports,” Tyler Montez said, referring to high school contact sports.

High school trapshooting uses weekly virtual competitions, so each team shoots at its own range. Their scores are entered into a website. Park is sixth in its eight-team conference, which includes schools as close as East Ridge in Woodbury and as far as Lincoln in Thief River Falls, in northwestern Minnesota.

That is a perk of the program, organizers said, because there is no team travel required. Students use their own transportation to get to the gun club.

This is the final week of the regular season of trapshooting competition. The students are practicing for the state championship next month in Alexandria. If they shoot well there, they’ll advance to a state tournament in Prior Lake. That event is significant because it’s the first trapshooting meet sanctioned by the Minnesota State High School League.

Kuemmel said the trapshooting team has drawn students who are involved in other after-school activities as well as kids who weren’t in organized sports.

“That’s one of the benefits I see with this program,” Kuemmel said of the wide appeal.