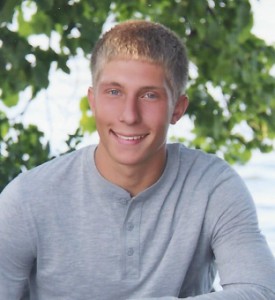 Meet Mark Geerdes, a senior from Kelliher High School, and our 2014 MN State High School Clay Target League’s scholarship recipient. Mark has been a Kelliher team member for four years along with being on the football, basketball, baseball teams servicing as team captain in many of them.

He has also taken advantage of other extra-curricular activities such as National Honor Society, Student Council, FCCLA and Class President.

Serving in a leadership role in many of Mark’s activities has allowed him to become a well-rounded individual both in his school and the community. Mark says, “I was not always the most outspoken student in the school, but instead I led by example by coming to school and practice every day, working hard, and being a respectful and helpful student.”

Being a volunteer in his community has been an important part of his life. Whether it was helping at church dinners, youth retreats, Adopt a Highway programs, shoveling snow for the elderly, taking care of dogs for sled dog races, annual Easter egg hunts, raising awareness of the importance of sleep for middle level and high school students, plotting out local cemeteries Mark has been there.

Next fall you will find Mark on the Bemidji State University campus where he plans to pursue a major in Biology.

The MSHSCTL is very proud to have students like Mark Geerdes participating in the League and wish him continued success.