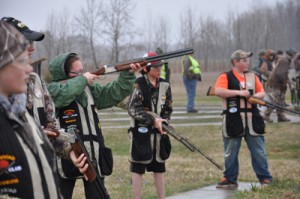 Warroad High School, which has about 450 students, had about 50 students compete in the school’s first year of offering a clay target team. Head coach Jeremy Sisler is expecting the team to grow in the coming years, as has been the case for many programs. Photo provided

Warroad High School, which has about 450 students, had about 50 students compete in the school’s first year of offering a clay target team. Head coach Jeremy Sisler is expecting the team to grow in the coming years, as has been the case for many programs. Photo provided

Warroad, Minn. — The regular season has wrapped up for the Warroad Warriors Trap Club, but the future looks bright.

The school, which has about 450 students in grades 7-12, had 49 students compete in the program’s first season in the Minnesota State High School Clay Target League.

“We had excellent turnout,” head coach Jeremy Sisler said. “We had a couple of seventh and eighth graders, but most were ninth grade and up.”

The Warriors finished in last place in their conference, but the important thing is that the program was started and that the kids got a taste of the sport, Sisler said.

He expects there to be more kids in the program next year and he expects their skills to continue to improve.

The team shot at the Warroad Trap Club, which was purchased recently by the Warroad Lost River Sportsmen Complex, which is currently building a new sporting clays facility.

Sisler, a trained sporting clays instructor certified through the National Sporting Clays Association, got his instructor’s license a few years ago, after he retired. It was that experience that led others to appoint him coach after the program was approved by the school board last fall.

“We went to the school board hoping for the best, and five minutes later, we were OK’d,” Sisler said.

Sisler has taken great pleasure in developing the kids’ skills and seeing their performances get better each week of the season.

The kids each shot a pair of 25-shot rounds each week, and it was tough going early on in the season.

“We had single-digit scores at first with some of them, but now at least everybody is in the double digits,” Sisler said.

Sisler, who said he has a competitive nature, said he stopped looking at the weekly scores after the first week, knowing his team would likely stay at the bottom of the standings. Instead, he focused on helping the kids improve their scores.

“Everybody improved quite a bit,” he said.

One of those kids who saw marked improvement was senior Cody Lovelace, 18.

“This is the first year we’ve had it,” Lovelace said. “But I’ve been shooting since I can remember.”

Still, years of hunting with his father for ducks and geese and occasional clay target shoots didn’t translate immediately to lots of success.

“He really knows what he’s talking about,” Lovelace said. “He says to shoot only one clay at a time, that one bird. Don’t think about anything else. That has helped me a lot. If you think about the big picture, you tend to make easy mistakes.”

That’s a win for Lovelace and a win for Sisler, who also mentioned another student, Bailee Elleson, as having made marked improvements over the course of the season.

“She had never shot a shotgun before,” Sisler said. “But this girl, she just loves it. She has a fire in her belly that just won’t quit.”

Sisler and several helpers work one-on-one with the students. There were some rewarding moments for him personally throughout the season.

“I remember one kid wasn’t getting in front of the target, and I told him, let’s miss this where it’s going,” he said. “He kept looking at his gun, and I said, ‘Look at the target. The gun will go where it needs to go.’ He hit one, and then another and another. After five targets straight, he turned around and said, ‘That really works.’”

Sisler said the school will also compete in the league’s fall program, and he is anticipating the team’s numbers to grow by at least 25 percent.

“We already have some sisters and brothers of one that were already in it, signing up for the fall,” he said.

The program has been well-received.

Lovelace said he was thankful the program was started in time for him to enjoy it.

“A bunch of my friends that graduated last year were upset that they didn’t get to compete,” he said.