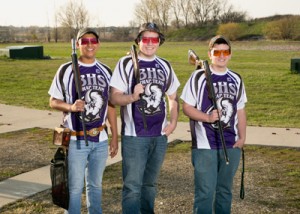 Max Hartman (l to r), Patrick Macnab, and Kurt Potter captain Buffalo High School’s clay target team. All three of them pushed for the school to add the sport, which was finally added this year.

Buffalo High School has quickly made a mark in its first year participating in the Minnesota State High School Clay Target League.

With only a few weeks remaining in the regular season, Buffalo was in second place in its eight-team conference behind the established program at Worthington High School.

“What’s more important to me is our team’s scores are improving from week to week,” said Sally Stevens, assistant coach. “That to me is success. We have three shooters that have hit 50 straight. I’m really proud of these kids. It’s a dream team.”

Just the fact Buffalo High now has a trapshooting team is a dream come true for Stevens. She and her husband, Mark Stevens, who is head coach of the program, have run the youth program at the Buffalo Gun Club for several years and tried for three years to get the program started at the high school.

The team has 22 members in its first year of existence.

Stevens credited both Buffalo-Hanover-Montrose Schools superintendent Scott Thielman and four of the students currently on the team, including captains Max Hartman, Kurt Potter, Patrick Macnab, who is also Stevens’ son, and team member Spencer Wilson, for getting the program going at the school.

Macnab said the four of them would pick a day of the week to talk to the activities director, asking what needed to be done to make their dream of a trapshooting team a reality.

“We were in the activity director’s office a lot, asking, ‘Please, let us have this sport,’” Hartman, a junior, recalled. “After three years of asking, we finally got it.”

Only two weeks before the deadline this spring, Stevens got word that the school would allow the program to start up.

“My parents had a couple of weeks of frantic planning,” Macnab said. “But it’s nice to finally have a sport that we can say we competed in.”

Stevens said it took time to work through all of the concerns that the school had, and required solutions such as the Stevenses keeping a gun safe at Buffalo Gun Club, where all of the students keep their shotguns locked up so they never bring their firearms to school, even in the trunk of their cars.

Stevens sent multiple emails to the team members, reminding them of the rules, and she pointed out the MSHSCTL’s impeccable safety record since it was started in 2009.

“I’m glad that we finally got the opportunity, and future students will have the chance to participate in this,” Wilson said. “The sport is growing rapidly and the team is giving a lot of high schoolers an opportunity to get into this.”

The sport gives students a chance to compete who might otherwise not have a way to represent their school.

Hartman, for example, started shooting in the sixth grade after he quit competitive baseball.

“My grandfather said I wasn’t going to sit home and do nothing all summer,” he said, calling his grandfather his father figure and hunting partner. “He suggested it, and I just really liked it.”

Hartman has excelled at the sport so much he was invited by USA Shooting to attend a tryout, which he was accompanied to by Mark Stevens, in Colorado Springs, Colo., last weekend.

Hartman is one of six students from the Stevens’ unaffiliated youth program at the Buffalo Gun Club, which has about 55 kids, aged 10 to 19, within a 60-mile radius around the club.

“We probably have six kids capable of shooting at the Olympic level,” Sally Stevens said, mentioning Potter has out-performed adults at Amateur Trapshooting Association events. “I don’t know who the best shooter is on the team. There’s a ninth grader who probably has more potential than all of them.”

But Stevens said the important thing is the experience the young shooters get in a nurturing environment, which encourages and teaches responsibility.

“We are coaching individuals,” Stevens said, noting that she and her husband teach an NRA-backed program that teaches individuals how to coach shotgunning.

“We are creating more solid, strong individuals through the sport of trapshooting,” she said, noting the three team captains have been through the program.

“We chose three teammates that eat, breathe, and sleep shooting or hunting and bring a little something different,” she said. “We wanted to create a sense of team. … Kids that connect with one coach or captain over the other can go to whomever they feel comfortable with.”