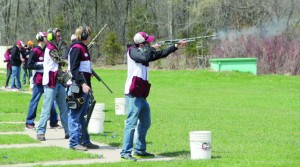 Members of the Central trapshooting team, including Mitchell Kells at far right, take aim at targets during competition at the Lester Prairie Sportsmen’s Club on May 4. Also pictured are Zach Stockman, Reed Carpenter and Justin Fabel. (NYA Times staff photo by Adam Gruenewald)

Members of the Clay Crushers, the Central trapshooting team, are setting their sights on staying safe, having fun and hitting targets.

Head coach Josh Kroells was instrumental in getting the activity going this year, beginning with a meeting in early January and continuing this spring with several meets at the Lester Prairie Sportsmen’s Club.

“I wanted to give kids the opportunity to have another sport and get them outdoors,” said Kroells, an avid hunter who also teaches gun safety courses.

Kroells first held an informational meeting in December, which was attended by about 30 students, to gauge student interest in the rapidly growing sport.

While he wasn’t sure what to expect, the level of participation has surprised him, as 31 kids, diverse in age — from sixth grade to seniors — and experience — from novice to experienced hunters — are part of the team.

To take part in trapshooting, students had to complete firearms safety training offered through Community Education and the Minnesota DNR.

“The biggest thing is safety,” said Kroells. “Then have fun and then hit the targets.”

During competition students take aim at 50 clay targets over two rounds. The targets are shot from trap houses and students shoot from 16 yards away.

The amount of targets hit are then entered at www.mnclaytarget.com where Central competes with Class AA Conference 4 teams, including Badger-Greenbush-Middle River, Canby High School, Hermantown, Hibbing, Irondale, Rockford and Sibley East. Students are also able to see where they stack up among the other teams across the state on that website.

So far Minnesota is the first state that is sanctioned by the Minnesota State High School League, whose Clay Target League, which started in 2001 with three teams and 30 shooters, now boasts 185 teams and more than 6,100 shooters.

The fact that Central is capitalizing on the rapid growing sport is not just thanks to the efforts of Kroells, but also due to the efforts of several volunteers, including Corey Hoernemann, Mark Harms, Ken Norman, Kelly Lueck and Bruce Pawelk as well as parents who provide lunch on competition days.

While rain cancelled some meets this season, Kroells said there haven’t been any major challenges getting the program started.

“The parents have all been very helpful,” he said.

In addition to giving kids the lifelong skill of hunting and trapshooting,  Kroells said the sport has also benefitted from mixing of grades and genders, as there are seven girls among the 31 students on the team.

“It’s a great opportunity to be with different kids,” he said. “I like the idea of sixth- through 12th-graders making friends.”

Despite misconceptions about gun usage, Kroells said the sport is safe. In fact there have been zero injuries in the Minnesota State High School Clay Target League since its inception.

For Central students safety has remained a consistent focus, as the first meeting began with a walkthrough of expectations, including how to hold a gun, transport the gun, use of a gun rack and also an overview of mandatory hearing protection. Students are also responsible for maintaining and cleaning their guns throughout the week.

Efforts are really paying off as well because Kroells said students have continued to develop their skills.

“It’s been pretty good growth,” said Kroells. “Some are practicing more than others and now they’re getting into it.”

Kroells added that goal setting has been a help for kids who are writing down and attempting to achieve weekly goals, whether that’s shooting five targets in a row or hitting a certain number of targets, depending on the individual.

Charting scores has helped kids monitor their progress as well.

“It’s cool to see the growth,” he said, adding that groups of students are getting together outside of competition to practice. “They keep at it and it’s building relationships.”

Among the students on the team is Mitchell Kells, who started shooting at home with a single clay target.

“It really opened my eyes and interests me and I started enjoying it,” he said.

Kells added that his scores have improved.

“First off, I was kind of bad, but then I started using a wall chart and it really helped,” he said, adding he scored a 23-out-of-25.

While a senior, Kells said he plans to keep taking part in the sport when he moves with his family to Tennessee, where he will be studying graphic design at Middle Tennessee State.

“The game is great and it’s a growing sport everywhere around the nation,” he said. “It’s really fun.”

Freshman Blake Harms has the lone perfect round thus far, as he hit all 25 targets.

“It gets down to the point once you hit that 20, you start to feel it in your bones and stuff, and you’re just shaking and you got to take it,” said Harms after reaching the feat on May 4.

Harms, who grew up hunting pheasant, ducks and deer with his dad, Kevin, and relatives in South Dakota, said his previous high was 22.

He attributed his improvement to practicing, staying focused and knowing he can always come back next week.

As a seventh-grader, Lily Schneider is also part of the future for Central trapshooting.

A newcomer to the sport, Schneider said her long-term goal is to shoot at least half of the targets.

“It’s a lot of fun,” she added. “Meeting new people and seeing different ways on how people shoot is a lot of fun.”

Looking ahead, Kroells said he wants to continue to offer trapshooting in the spring for students and wants to continue to develop fundraising options, in addition to a beef jerky fundraiser, to limit expenses. Students had to pay $100 to take part this year, but did get a T-shirt, hooded sweatshirt and shell bag and cover as part of the fee.

Kroells also mentioned the possibility of offering the sport in the fall as well, which some other schools have done.

“Hopefully that will be an option in the future,” he said. “Gradually we could grow into that.”

“I appreciate the money and it helps a lot,” he said.

Those sponsors and volunteers have boosted membership and increased opportunities for students.

“Some schools have waiting lists for people to get in,” he said. “I want to let everyone in and want to make it work so they can shoot. I don’t want to take away a chance from someone. You’re never sitting on the bench, and you’re playing every week and that’s cool.”

Next Saturday, May 31, the group is planning a community event from 9 a.m. to 12:30 p.m., where everyone is welcome to bring shotguns and shells, and school board members and staff are also invited to the casual get-together.

Also, on June 7, the team will take part in a championship in Alexandria.

The Lester Prairie Sportsmen’s Club is located at 3548 180th Street.

For more information on the Central trapshooting team, visit http://crtrapteam.wix.com/crtrapteam.