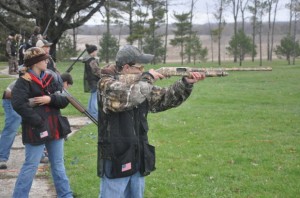 On a soggy, dreary day, Cleveland students stood outside the Caribou Gun Club in Le Sueur, smiling and having a good time.

An orange clay target flies through the air.

The sound of a shotgun permeates the air while the clay target shatters.

“I like hunting,” said senior Bailey Ellickson. “[The team] was something new, I wanted to help launch the program.”

Coach Jack Zimmerman helped found the program, after seeing a lot of interest in the sport. Several Cleveland students have been involved in the sport before, participating on the Le-Sueur Henderson team.

Zimmerman said the number of students who joined was greater than he imagined. More than 30 students head over to the gun club each week to participate on the team.

And the kids have a had a blast so far.

“It has been going incredibly,” said Zimmerman. “The only thing missing … is the weather.”

So far, the dreary weather has plagued the start of the season, but the team still shoots every Wednesday. Though the weather has been gloomy, the Clippers shooters get through the cold, wet weather with smiles on their faces, making Zimmerman proud of what they are doing.

And though it is a school sport, it is in some ways less demanding than others. For the competitions, teams shoot at their own home course — in this case the Caribou Gun Club — and then record the scores online.

The team meets one night a week and at different times so the students can fit it into their schedule. Originally, Zimmerman wanted to have two separate times so team members could participate in another school sport or activity as well. But the number of students who joined the team makes the extra session necessary.

Zimmerman is excited that Cleveland will now offers the sport, which is growing fast. When the Minnesota State High School League Clay Target League started in 2001, there were only three schools and 30 players. This spring, there are 185 schools and 6,100 players participating in the trap shooting league.

Bailey Ellickson said the trap shooting team is a great group to be a part of. She recommends that others give it a try.

“I don’t know who wouldn’t enjoy it,” said Ellickson.