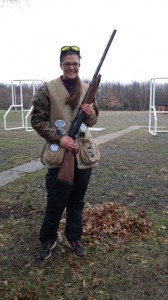 North Hudson, Wis. — At 17 years old, Jenna Jahnke has quietly made a mark in shooting sports.

Jahnke, a senior at Stillwater High School, was instrumental in getting the school’s clay target team started in 2012.

Jahnke credited Sable with encouraging her persistence to get the sport added to the school’s athletics program.

And Jahnke can shoot. She finished in third place at the MHSCTL’s state tournament last year.

“She’s one of the top three shooters on the team,” assistant coach Eric Wahlstrom said.

But Jahnke is a humble, quiet kid. She knows only a few of her teammates on a team that has quickly grown to 84 students. The team is made up of kids in grades 6-12 from Stillwater High, Stillwater Junior High, and Oak-Land Junior High.

“She doesn’t toot her own horn,” head coach Ken Bjorlin said, discussing the fact that quite a few members of the team don’t know Jahnke’s role in starting up the program. “Almost a third of the team is new this year.”

Jahnke downplays any real controversy in pushing for a clay target team at the school, but acknowledged that the school’s athletic director resisted the idea.

“It took some time and countless meetings,” Jahnke said, mentioning that she leaned on Sable for support. “I was just determined to start it.”

“She was the impetus behind it,” Bjorlin, a math teacher at Stillwater High, said.

Jahnke approached Bjorlin, needing a faculty member’s support to get the activity added.

“She came around asking for support from a teacher,” Bjorlin said. “I like shooting. I am not a super trap shooter, but I wanted to help. … She has contributed her part.”

Bjorlin noted that Jahnke is the club’s student treasurer.

“She puts in time to help the club,” Bjorlin said.

Jahnke said she first was turned onto trap shooting by her older cousin, Jason Jahnke, who took her shooting a couple of times to the Willow River Rod and Gun Club in New Richmond, Wis.

“He took me out there when nobody was shooting and we set up a thrower on the ground,” Jahnke said. “He taught me how to shoot.”

Jahnke and her cousin proceeded to participate in a summer youth league at that club.

That’s where her inspiration to shoot trap came from, though she has no plans to take up hunting.

“I do really enjoy this,” Jahnke said.

When the team first started in the spring of 2012, she was nervous that nobody would come out for the team.

“I didn’t know if there was going to be a team,” she said, noting the requirement of at least five shooters for one squad.

But the first year, 18 shooters came out. And last year, the second year, the team grew to 76 members, sending the coaches scrambling.

“Everyone was shocked last year that there were so many kids, and they weren’t sure how to organize it,” Jahnke said, noting that the team is better organized this year.

The club shoots on Sundays and Mondays at the Hudson Rod and Gun Club, across the St. Croix River in Illinois, with about half the club shooting one day and the other half on the other day.

“It’s great,” Wahlstrom said, while watching his own daughter shoot in a cold, persistent rain at the club on Monday. “It’s super that there is so much interest. The problem we’re running into is there might not be enough facilities.”

It mirrors the growth that has taken place in the sport statewide. There are now more than 260 schools participating in the league, with more than 6,000 students.

That will take place at the Minneapolis Gun Club in Prior Lake on June 14. And only the top 100 shooters during the MHSCTL’s regular season will be invited, as well as 20 teams.

The MHSCTL will continue to hold its more inclusive state tournament, with about 4,200 shooters expected to attend, at Alexandria Shooting Park on June 6-10.

“I’m excited about the new state tournament,” Jahnke said, just before she took her two rounds in North Hudson on Monday, as the rain fell.

“It was like this at the state tournament last year,” Jahnke said. “My goggles get all wet.”

Not that it will stop her.

Outdoor News
BY JAVIER SERNA ASSISTANT EDITOR
Posted on May 1, 2014