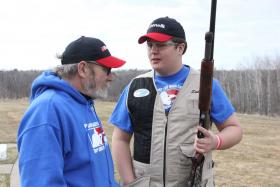 The growth in the participation numbers for high school trap shooting in Minnesota has been admirable over the past four years.

It began when Jim Sable started a high school trap shooting team with 10 students in Hopkins in 2001. It expanded the following year to include teams from Minnetonka and Excelsior. Growth was slow, but did increase to 29 teams across the state in 2011. It then exploded in popularity in the next few years as the team total grew to 59 schools in 2012 to 114 teams in 2013 and then 185 programs with more than 6,100 total students this spring.

“Jim Sable is the driving force behind this,” said Steven Weagel, one of the coaches this spring for the Pequot Lakes High School trap shooting team. “He deserves the credit.”

Weagel has been involved in high school trap shooting in recent years. He was an assistant coach with the Brainerd team before joining the Pine River-Backus/Pequot Lakes program in 2012.

“I see what (trap shooting) does for the kids,” Weagel said. “It teaches self-discipline, respect and self confidence. We teach the students to treat (the sport of shooting) with the dignity and respect of the adult world.”

The sport has also grown in the area. Pequot Lakes and Pine River-Backus had a combined team of 24 shooters in 2012. The roster expanded to 34 last year, which led to the schools dividing into two teams this spring with more than 50 students interested in participating. Pequot Lakes opens the season with 21 shooters while PR-B has 33 students.

“I was asked to help the Pequot Lakes team since I’ve been shooting trap for a long time,” Weagel said. “I understand the physics of what each person is doing, and I can help them make corrections.”

Weagel said trap shooting takes the “mystery” out of firearms as each participant is required to earn the firearms safety certification, which is more than 50 hours of training.

“Our sport empowers (students) to handle a firearm in a safe, responsible manner,” he said. “It really separates them from the teenage peer group pressure. They really become responsible kids.”

Weagel adds that trap shooting is open to boys or girls of all athletic abilities.

“You don’t have to be 6-foot-4 or run a 100-meter dash in 10 seconds,” he said. “(Trap shooting) offers a competitive sport to kids who may not be involved in other sports.”

Molly Keefe, one of the coaches for the PR-B trap shooting squad, is also impressed with the sport’s growth.

“It has been growing so fast,” she said. “It’s something different for the students, and it’s a sport that anyone can do. It’s a good sport for the kids because of the self confidence, and they learn how to properly use firearms.”

The Pequot Lakes team is off to an admirable start as sophomore Zach Lyonais hit 25 of 25 targets at the first competition Sunday, April 20, at the Lakeshore Conservation Club’s range. Lyonais finished with 46 out of 50 targets while teammates Sam Wallace made 45, Chris Newton and David Schroeder each had 42, and Trenton Beyer and Jordan Hall had 40. Some of the Pequot Lakes shooters, like Beyer and Austin Mesenbrink, are also competing in other spring sports for the Patriots. PR-B’s first competition was scheduled for Wednesday, April 23.

Each team around the state has five weeks of competition at their home ranges. Averages for each student from those weeks determine the ranking for a championship in Alexandria for the five classes June 6-10. This spring, the Minnesota State High School League added a sanctioned state tournament on June 14 in Prior Lake for top shooters advancing from the Alexandria meet.