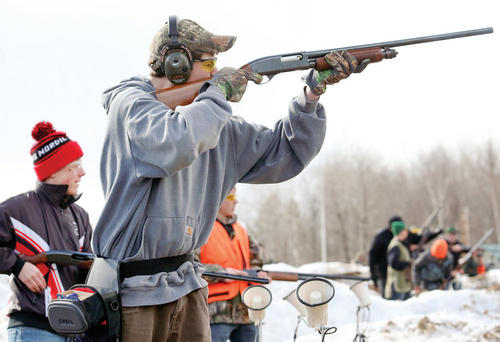 The state’s fastest-growing high school sport doesn’t require a ball, a puck or a bat.

What it requires is a shotgun.

The sport is trapshooting, in which young shooters toe a line and draw beads on clay discs slicing through the spring sky. Students from Hermantown, Proctor and a combined Duluth team gather at the Jack Meade Gun Club near Proctor twice a week to practice. All compete in the Minnesota State High School Clay Target League.

About 90 students on the three teams take turns shooting clay targets at the gun club on practice nights. About 6,100 student-athletes on 185 teams are taking part in the Minnesota State High School Clay Target League this year, up from just three teams and 30 students in 2008.

This year, for the first time, the sport will have a state tournament sanctioned by the Minnesota State High School League.

The Jack Meade Gun Club is home range for all of the area’s teams, which begin shooting in early April and compete until the state championship in early June. This is Hermantown’s fourth year of shooting and Proctor’s second. The Duluth team, made up of students from Denfeld and East, is in its first year.

The gun club’s members have helped the teams by donating money for shotgun shells and targets, and by giving tips on shooting techniques.

This year, the teams also are getting financial support from the St. Louis/Carlton County chapter of Pheasants Forever based in Duluth. The chapter, in partnership with the MidwayUSA Foundation, has contributed $9,000 to the Hermantown team’s endowment account and is currently establishing endowment accounts with the Proctor team, the Duluth team and the Superior Junior Rifle team, according to David Lood, youth director of the local Pheasants Forever chapter.

“This falls directly in line with our mission of getting kids outside and in tune with nature,” Lood said. “It’s a fully co-ed sport, open to people with disabilities or handicaps. It’s very inclusionary. That’s what we like about it.

The Jack Meade Gun Club has received a $1,800 grant from the National Rifle Association to pay for shotgun shells for local teams at the state championship, Pappas said.

In the high school league, boys and girls compete side by side on the same teams under the same rules, shooting at targets in two groups of 25. Shooters stand on the shooting line 16 yards from the trap house, from which clay discs are launched.

The sport is open to students in grades six through 12 who have acquired their state firearms safety certificates.

Competition among teams is held weekly, with teams shooting on their home ranges, then sending in scores. All of the shooters are invited to the state championship, to be held June 6-10 at Alexandria, Minn.

That will be up from about 1,800 students last year, according to the league.

Pheasants Forever and the Hermantown team will sponsor the first Pheasants Forever Shoot on May 31 at the Jack Meade range. About 200 high school shooters are expected to take part, Pappas said. Trapshooting teams from Hibbing, Aitkin, Grand Rapids and other schools will be invited.

“It’s a week before the actual state competition,” Lood said, “but there’s no pressure. It’s just for fun.