It’s all about breaking clay. 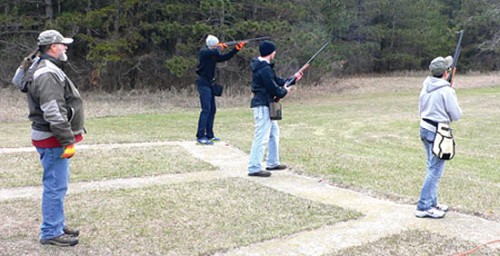 “Trap shooting uses your natural ability to point in sync with your hand-eye coordination to consistently break as many clay targets out of 25. The clay target is an approximately 4-inch disk flying through the air in random directions,” explained Kingsland trap team co-coach Doug Plaehn, pleased to be perched above the shooting field, keeping score as Kingsland students fire at the orange clay projectile objects.

Though the typical trap shooting team participant might be considered to be someone who has been a member of 4-H Shooting Sports and other organized shooting opportunities, Plaehn related that it’s quite the opposite. “This year, we only have one athlete that participated in 4-H Shooting Sports, and eight of the 12 participating had never shot trap before.”

“Including 4-H Shooting Sports, I have been coaching for 10 years,” said Plaehn. “Neal and Mike have been coaching a few more years than I have, and the three of us have a combined 40-plus years of volunteer shooting sports coaching experience. From time to time, we will ask parents to assist with scoring, et cetera.”

The shooters’ season began March 30, and consists of nine weeks – two practice weeks, a reserve week, five competition weeks and a fun week to wrap up the season. They do not travel to other sportsmen’s clubs, even when they have tournaments.

“We compete in a virtual league and do all of our shooting at the Spring Valley Sportsmen’s Club,” explained Plaehn.

The virtual meets mean family travel is minimal because practice and competition are conducted at a shooting range near the school’s location. Conferences are determined by team size rather than geographic location for fair competition. Athletes earn True Team™ scoring points as determined by their performance and ranking against all athlete scores within their team’s conference.

The team score and overall standing are calculated by adding the earned points from qualifying athletes and posted on the MSHSCTL’s website. Athletes and their families track their individual and team performance on their phone, tablet or computer via the Shooter Performance Tracker.

Plaehn noted that the team has had two athletes – who are no longer high school students – participate in the Minnesota State High School Clay Target League state tournament in the three years that there has been a Kingsland trap team.

The state tournament in the spring is in conjunction with the Minnesota State High School League, which is the only state high school interscholastic athletic association in America to provide support and recognition for trapshooting as a high school sport.

Students are not handed firearms and simply allowed to fire at will – all the spent ammunition and targets come with training. The MSHSCTL notes that this is the safest sport in Minnesota high schools as there have been no injuries reported in Minnesota since 2001.

“Our first priority is that the students learn to handle firearms and ammunition safely and responsibly. Their participation is a privilege, not a right, and academic priorities must come before participation,” said Plaehn. “We’d like them to develop the skills to participate in the shooting sports that will last for their lifetime, which they can share with family and friends. The shooting sports build connections within families and communities for life.”