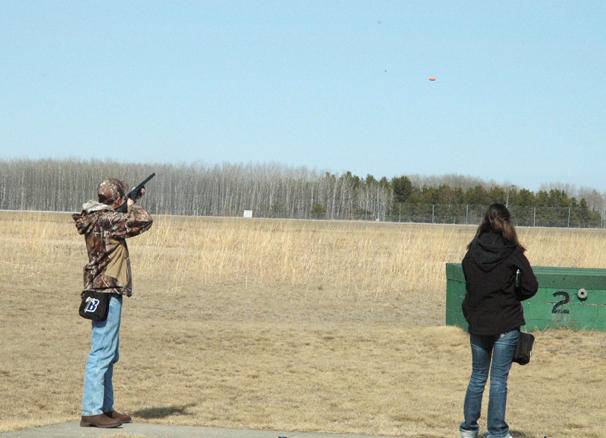 Zachery Suther, an eighth-grader, takes aim at a clay target as he competes as a member of the Bemidji High School Trap Team. Pictured at right is team member Hailee Todavich, an 11th-grader, as she waits her turn. BETHANY WESLEY | BEMIDJI PIONEER

Bailey Windecker, a senior at Bemidji High School, said she’s been shooting for as long as she can remember.

On a recent Tuesday, she set up beside four of her peers as they lined up at the Bemidji Trap and Skeet Club and took turns firing at clay targets.

“It’s my senior year,” Windecker said. “I’m just so happy that I got at least one year to do this.”

Windecker is one of 48 students in grades 6-12 who have joined the Bemidji High School Trap Team. The team, now in its first year, meets Tuesdays at the Trap & Skeet Club.

Seventh-grader Cole Tatro said he never had shot a firearm before he joined the team. But he’s catching on quickly, having improved his scores over the first few weeks. His best score so far is 18, out of a possible 25 each round.

“I want to get an average of 20” before the season is over, he said.

It works like this: In squadrons of five, participants line up in various positions and each take turns shooting at clay targets. After each shoots five times from one position, they rotate one spot for another five shots. One round consists of 25 total shots. A hit earns them a point.

Later, the squadron gets a second round of 25 shots.

Those scores are reported to the Minnesota State High School Clay Target League. In 2008, the League had 30 students competing in three teams at three schools. This season, it has 185 teams at 275 schools with 6,100 participants, making it the fastest-growing sport in the state.

All participants, in following the League’s priorities of safety, fun and marksmanship — in that order, must have firearms safety certification.

The League is broken into conferences and head-to-head competitions occur weekly as scores are reported in; teams compete virtually.

The five-person squadrons don’t change on that day, but can be tweaked between weeks. Bryan Hammitt, the head coach, said the team so far has been open about letting groups team up based on their availabilities and schedules, but he plans to group shooters in squadrons with similar skills sets as the season progresses.

“Trap is a very mental game,” he said.

Looking at the team as a whole, Hammitt said he’s pleased with the turnout in the first year and even more impressed by the developing camaraderie.

“I’m really happy all the kids are getting along so well,” he said, looking over a room full of sixth- to 12th-graders, all positively interacting, talking and laughing over bowls of chili. “We have leaders here. It goes beyond trap. We really have a great group of kids.”

Dave Smith, a team coach, said there are maybe 10-12 of the BHS team members who have shot competitively before, through 4-H, but the majority of the participants are new to the sport.

The first week, 38 shooters combined for an average round score of 15.4

The second week, 48 shooters boosted that average to 15.9.

The program, coaches said, would not be possible without parental support and involvement.

Since guns are obviously not allowed on school property, participants leave school, go home to get their guns, and then report to the Trap & Skeet Club.

Brad Smith is the president of the Trap & Skeet Club. He first proposed the club to the Bemidji School Board for authorization last spring.

“For me, this all goes beyond just shooting,” he said. “It’s about the involvement with the kids, it’s about teaching gun safety, it’s about having fun.”

Smith said he’s seen himself the improvements being made, recalling one new shooter who was unable to hit his target the first week but came back in the second and cleanly hit most of them.

“In the course of that one week, it just all clicked,” he said. “Trap is easy to learn, hard to master.”

The Trap and Skeet Club is now open Wednesdays so it doesn’t yet conflict with the BHS team’s schedule, but starting next month through the end of the summer season the Club also opens on Tuesdays. Then, the young shooters will be interacting with the Club members, who vary in age all the way up to 80 and beyond.

Smith said he’s looking forward to that time, when the students will be learning from and observing seasoned shooters.

Bryce Saiger, a 10th-grader, finished his first round last week and walked off the range to store his shotgun. He said he’d been shooting for two years.

“Some people were shooting and it looked pretty fun so I tried it and just got hooked,” he said.

He knew he wanted to join the team as soon as he heard about it.

“It’s awesome that we’re able to do this now,” Saiger said.

His scores aren’t quite where he wants them to be — he too wants to average a 20 and also wants to score a perfect 25 — but he has time. The season culminates in a State competition June 6-10 in Alexandria, in which all participants can opt to compete. A Championship is set for June 14 in Prior Lake.

“A lot of my friends are on (the team) so that’s been really nice,” Saiger said. “It’s something I look forward to.”