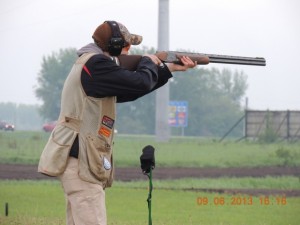 Parker Witt is a returning letterwinner for the Stillwater Area High School’s Clay Target Club, which has grown from 18 members during its first season two years ago to 85-90 preparing for the 2014 season. (Contributed photos)

The competition is scheduled to occur during the second week of June, and is notable because Minnesota is the first state to have a state-sanctioned trap shooting tournament like other official high school sports and activities.

The size of SAHS’s shooting team has grown exponentially during its first years of existence, and more and more students are flocking to it for the start of its third season. The team now consists of about 85-90 students from grades 6-12, a dramatic increase from its first team of 18 in 2012, and has a head coach as well as four assistant coaches.

“A lot of kids in the community like to hunt and shoot, and even if you don’t like to hunt, it’s a fun sport that you can do for the rest of your life,” head coach Ken Bjorlin said.

“I think many of the shooters that participate are also hunters, but I also believe that trapshooting is an equal-opportunity sport,” added Alan Downie, one of the team’s assistant coaches, “You don’t have to be big or fast — it’s a sport that anyone can participate in and excel at.”

Both coaches and students agree that communication has been the biggest factor in the growth of the team. From kids telling other kids to parents calling in to the school to inquire about the new sport, word about this new activity spread quickly around Stillwater’s community.

“After seeing how successful the first season was, joining the team became very attractive for anyone interested in shooting, whether they were new like me or long-time hunters or shooters,” said senior Mark Houle, a second-year member of the team.

The team meets twice a week to practice at Hudson Rod, Gun and Archery Club, which is located in North Hudson, Wis. At a typical practice, each team member shoots two rounds consisting of twenty-five targets, taking five shots at five different stations. The club features three fields, or trap sites, where 15 kids can shoot at the same time to provide for about 45 students shooting every hour.

“We’ve tried to schedule the time we have at the club to minimize the down time for each student-athlete so they don’t feel like they’re wasting their time standing around,” Downie said. 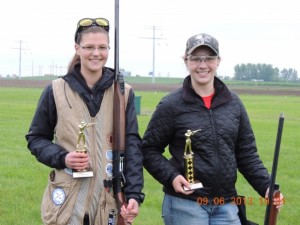 Stillwater senior Jenna Jahnke, left, shown after placing third in the state tournament a year ago was one of the driving forces behind the creation of the school’s first trap shooting team in 2012.

The team participates in ‘virtual’ competitions with other high schools by comparing their scores with those of other high schools, culminating in the Minnesota State High School Clay Target League Championship in June, the biggest high school tournament in the nation.

The new MSHSL-sanctioned tournament, which will occur the week after the MSHSCTL event, is different from its predecessor in that team members have to qualify individually by shooting a certain season average. The top 100 shooters will compete for the individual title, and the top 20 teams in the league will also compete for team honors.

“I think this is a great step in shooting sports at the high school level and serves as a testament to how fast the sport is growing, in Minnesota especially,” said Houle.

To compensate for the growth of the team, Bjorlin and Downie, along with assistant coaches Kevin Witt, Eric Wahlstrom and Matt Simcik, are looking to recruit additional help.

“Through the sheer growth with the team, it has become apparent that it takes a coaching team to help each other,” Witt said. “We’ve all taken coaching classes and range safety classes to further prepare to help the athletes.”

“More instructors and assistants would be helpful,” Bjorlin added. “It’s a group effort, after all, and I’m grateful to all the parents and people who help take pictures and help with the end-of-season banquet. We rely on them to spread the load.”

Last year, the coaches hosted several practice days to allow new or inexperienced shooters the opportunity for more coaching time, and they are planning on doing this again to prepare for the new season.

Downie described this extra period of time, saying, “We’re having introductory meetings for new shooters and their parents. This will be followed by open practice time with the coaching staff beginning in mid-March. We’re hoping that this will allow the shooters to become more comfortable with how trap is shot in a more structured environment.”

In addition, the coaches are attempting to get their administrative tasks out of the way well before the season starts.

“Last year, everything seemed to come together during the kids’ shooting time, which made things hectic,” said Bjorlin. “This year, we’re trying to get our logistics done earlier and hand out gear and shells beforehand so that shooting time can be for shooting.”

The coaches are feeling confident about this year’s crop of students, which is relatively young for a trap shooting team.

“We had a lot of young shooters who now have two years of experience under their belts, so we hope to have a good team showing this year,” said Bjorlin. “When you take into account the fact that some teams have been shooting for 10 years, we’ve had good success overall.”

The student members of the team also share this opinion, noting the team placed in 15 out of 114 teams in the state a year ago.

“I think Stillwater shapes up pretty well against other teams in the state,” Houle said. “Considering we were in our second season last year, we had a very good showing in both the conference and state tournaments.”

Expectations continue to grow and the team is looking for an even better showing with the addition of new members and new talent.

“The growth in Minnesota with the Clay Target League has been unbelievable,” said Witt. “The primary national organization, the Scholastic Clay Target Program, is seeming similar growth as well. This just underlines the desire for kids to have another avenue to participate, compete and have some fun. There are teams from Minnesota to Arizona — it is truly a national sport now.”

Senior varsity member Jenna Jahnke, who has been on the shooting team since she was a sophomore, was responsible for the initial creation of Stillwater’s Clay Target Club back in 2011.

“I had a lot of help from Jim Sable, the head of the Minnesota State High School Clay Target League,” said Jahnke. “I started e-mailing him and asked him how I could start a team at school, and he helped me with the different steps.”

Jahnke’s efforts included meeting repeatedly with the athletic director at the high school before submitting the necessary paperwork with the rules and regulations for the new trap shooting club. Finally, the school gave the green light for her idea to become an official club. Then Jahnke asked head coach Ken Bjorlin to be the sponsor for the new club. Since Bjorlin had previous experience shooting and enjoyed hunting both duck and ruffed grouse in his free time, he agreed.

“I had no clue it would get this big,” Bjorlin said. “I just knew that it was a fun activity to do and thought that other kids might like to do it as well.”

Jahnke, whose impressive scores from last year include a 49 out of 50, is hoping for a perfect score of 50 for this upcoming season.

“I want to shoot as well if not better than last year, including some straight 25’s and a 50 straight,” said Jahnke, before adding, “I feel pretty accomplished that I started this club, and I sometimes don’t realize until I think about it that I was a big part of making it happen.”

Anna Bjorlin is a Stillwater Area High School graduate and currently the news editor of The Column, which is the student newspaper of the University of Northwestern — St. Paul.