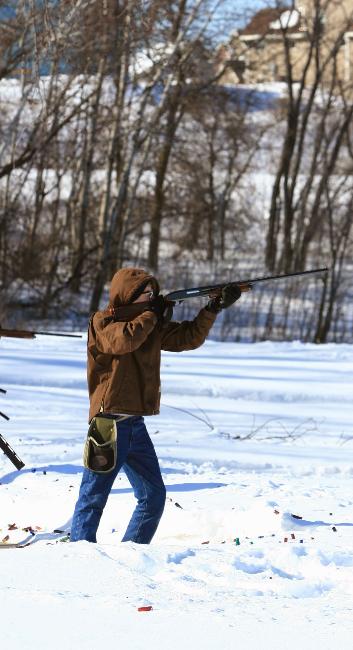 Thomas Lehnherr, a 10th-grader at Holy Angels, is gearing up for the new Richfield trap shooting team. He recently competed as part of a winter team at the West End Fishing and Hunting Club in Eagan.

Lauren Schmidt, a 10th-grader at the Academy of Holy Angels in Richfield, is involved with her school’s theater productions and the social justice club. Soon, she’ll add trap shooting to the mix.

The age-old sport involves shooting at clay targets that are launched out of small “houses” at the shooting range. Participants shoot for two rounds, each of which includes 25 targets.

Schmidt got interested in trap after her cousin, Hannah, raved about the extracurricular activity. After hearing her take on it, “I thought it would be a good opportunity to make some new friends and learn some new skills,” while enjoying the outdoors, Schmidt said.

This year, Holy Angels and Richfield High School are joining forces to start the trap shooting team, which has a March 1 registration deadline, according to head coach Robert Brotzel, who is the police liaison officer for Richfield High School and a firearms safety instructor for the city’s Police Department.

The West End Hunting and Fishing Club in Eagan will be the team’s home base for practices and competitions, he said.

Richfield is among a growing list of high school teams in the west metro and beyond that are cropping up in the Minnesota State High School Clay Target League, which got its start in 2000 and incorporated in 2009, according to John Nelson, the league’s vice president.

The coed club sport is becoming so popular at the high school level that it’s already starting to get crowded at the local gun clubs, Brotzel said.

Brotzel, who coached Apple Valley’s Eastview High School team during its inaugural season last year, said he’s has found that the sport appeals even to those who aren’t necessarily athletic.

Although many of the youth expressing an interest in the sport have grown up hunting and fishing, just about anyone can excel at trap. “You need good eye-hand coordination” and a weapon that fits, he said.

Students supply their own shotguns, while a $279 fee covers the cost of ammunition, shooting time at the range and a Richfield team uniform, he said.

To sign up for the team, students first must get state-certified in firearm safety, according to Brotzel.

Safety is the top priority. Then, “my goal is to make a fun, safe learning environment” for students, he said.

Judging by the league’s track record, he sees the sport as “safer than any other high school sport, with no concussions or broken arms,” he said.

John Nelson, the vice president of the Minnesota State Clay Target High School League, reiterated that point. It’s about learning to use firearms responsibly, he said.

So far, the league hasn’t had any injuries or gun policy violations, he said.

The numbers show that the league fills a unique niche. “We’re reaching an audience that’s never been reached before,” he said.

Part of the draw is that “you don’t have to be the fastest or the biggest. Everyone can shoot trap,” he said, adding that every team member participates. “There are no benchwarmers.”

Another plus is that teams compete by size and in a “virtual competition,” not according to their geography, he said.

They shoot at their local gun clubs, so there’s no travel. Scores get tallied online.

The league’s program has been a model for other states looking to get into competitive high school trap shooting, Nelson said.

He credits league founder Jim Sable, an avid trap shooter and a regular at the Plymouth Gun Club, for its progress.

Once he hit retirement age, Sable realized he was one of the younger ones at the gun club, Nelson said.

Seeing that the sport’s future “wasn’t very bright,” Sable wanted to bring a new generation into the fold, he said. That led him to start a youth mentoring program in the Orono school district in 2001.

From there, the league began taking shape, and it became incorporated in 2009, he said. Since then, the volunteer-driven league has drawn thousands of students, up from its original group of 30.

Also, the league expects to see as many as 5,000 students to its championship in Alexandria in June, which Nelson claims will make it the largest trap shooting event of its type in the world.

Later in June, the top 100 athletes will go on to a separate competition in Prior Lake that’s being hosted by the State High School League. That collaboration represents a first in the state and in the country, he said.

Wannebo started accompanying his dad, Tom, a master shooter, to the shooting range as a 5-year-old.

Trap shooting has been a good way for him and his dad to spend quality time together. They usually go shooting on Sundays after getting breakfast at the gun club, he said.

His dad, who is in a wheelchair, uses a custom-made stool to stake out a spot on the range, either as a participant or an observer.

At first, Wannebo wasn’t a big fan of the sport. But as he started doing it more in recent years, “It clicked. I understand how it works. It’s fun now and I’m competitive,” he said. He and his dad have both racked up numerous prestigious shooting awards. They’ll help out the team as assistant coaches.

“I like the feeling when you shoot really well, or if you have a really good day,” he said, adding, “It’s like hitting a home run.”

If he’s having a bad day, “It cheers me up. It’s a stress-reliever,” he said.

Pat Lehnherr shares his enthusiasm. His son Thomas, a 10th-grader at Holy Angels, will be on the team. Lehnherr, who’s been trap shooting since he was young, is looking forward to mentoring the group.

For him and Thomas, “it’s a great activity that both of us can do that’s not in front of the TV. We get outdoors and we have a great time,” he said. “The only thing that I can think of that comes close is golf, but trap shooting is louder.”