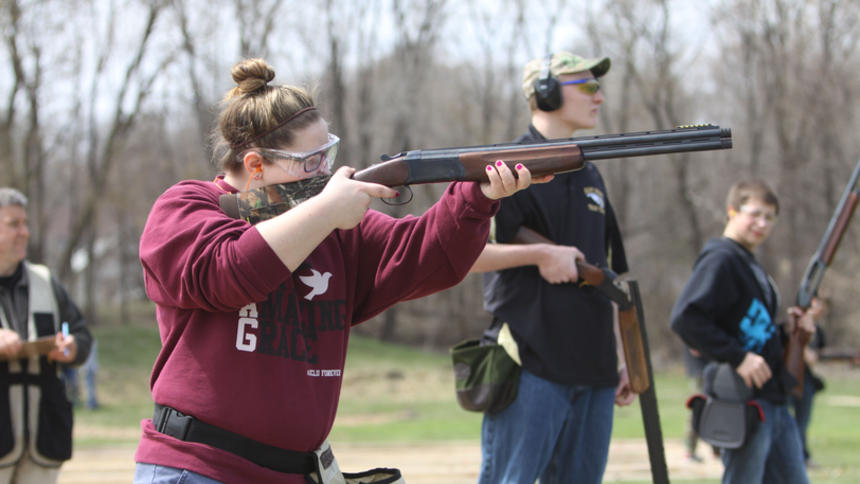 When helping to get the new Park High School trapshooting team off the ground, Wendy Coy wasn’t sure how much interest there would be.

However, when roughly 55 students showed up at the first informational meeting Jan. 21, Coy realized she was part of a worthwhile endeavor.

With the formation of a trapshooting team, Park joins neighboring schools East Ridge, Hastings and Woodbury, who have had active teams for years. Registration for the Park High School trapshooting team is open to all Park students in grades 7-12. A valid firearms safety certificate is required to participate, however, one can be acquired through the Park program’s coaching staff before the season begins.

Park graduate Pete Soukup is the team’s first head coach. Soukup, a Cottage Grove resident, is the Pheasants Forever Mississippi Longtails chapter president. He has been part of getting the Hastings High School trapshooting club off the ground. Park also has eight additional volunteer coaches.

“Pete has had kids graduate from Park and is really excited about doing this at his former high school,” Coy said. “He can get the kids trained and get them certified. They just have to go through training and go out to the range with a range safety officer.”

Trapshooting, one of the nine shooting events presented in the Olympics, is one of three competitive clay pigeon shooting disciplines. In trapshooting, clay pigeons whirl out of machines at over 40 miles per hour. The shooter’s goal is to explode the pigeon with his or her shotgun. The other shooting disciplines are skeet shooting and sporting clays. Unlike trapshooting — where targets are launched from a single machine one at a time — in skeet shooting, targets are sent from two houses simultaneously in paths that intersect in front of the shooter. Sporting clays most resembles bird hunting as it includes a more complex course in which clays are launched from a variety of targets.

The co-ed Minnesota State High School Clay Target League started in 2001 with 30 students from three schools, but has expanded to upwards of 170 schools and roughly 4,000 participants currently.

Students on the Park trap team will shoot clay targets at the South St. Paul Rod and Gun Club each week, on Wednesday or Sunday, under the direction of coaches and range safety officers. Their scores will be matched against other students on similarly sized teams. Scores are submitted online and compared against other scores from teams of similar sizes that make up those schools’ conference, and points are awarded across multiple categories.

“It’s a sport that both boys or girls can take part in and it doesn’t matter if they’re in another sport,” Coy said. “Everybody gets an opportunity to participate, nobody sits on the bench, and everybody’s score counts toward the team.”

With trapshooting, at no time are the guns allowed on school property. Students pick up the guns at home after school and go directly to the club. Also, schools may have safes at the gun clubs so kids don’t have to cart the guns around.

Since its beginning, there have been zero injuries related to high school trapshooting and no violations involving guns on or near school property in Minnesota.

“We have very strict rules and guidelines,” Coy said. “We’re really promoting safety. We know there may be some pushback because guns are involved. But, we keep this safe.”

The season, which starts March 30, is eight weeks long and begins with two weeks of practice shooting, leading up to the first competition in April. The Minnesota State High School Clay Target League’s State Open tournament on June 6-8 is open to all team members, regardless of how they performed during the season.

Following that will be the Minnesota State High School League’s state tournament on June 14, which will include the state’s top shooters.

This year, Minnesota will become the first and only state high school athletic association in America to sanction a trapshooting tournament.

Park has roughly 40 kids signed up for the trap team already. Registration is open until Feb. 7.