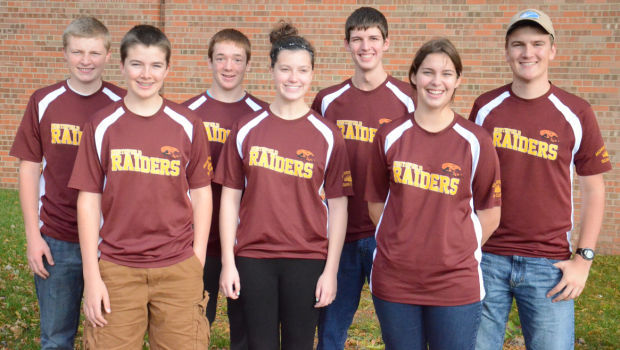 It took them just a little while last week to really hit their stride. But once the six Northfield High School athletes got some momentum going there wasn’t much stopping them.

Seated together at a round table in the high school’s cafeteria, excitement took over as the conversation turned from their start in the sport to their latest season. The seated Raiders were all members of the NHS trap shooting team. They just completed their fall season, the second trap season after last spring marked the first for the school’s newest athletic team.

“The second [season in the fall] was a lot easier,” Alex Malecha said. “I had more fun this season. We all went out in the spring, had fun, then came back and knew each other [in the fall]. It was really fun.”

They knew the sport better as well, and that showed itself in vastly improving scores throughout the four-week season: Five different Raiders ended up in their conference’s top 10 for average, and Jarrett Croy was the best shot in the state with a 24.2 average out of 25.

“I went from knowing nothing, to learning and being number one in the state,” Croy said. “We always challenge each other to do better.”

Through two seasons that challenge has drawn the attention of many new athletes, and the hope is that the trend continues: Forty Raiders were on the spring team, 30 were on the fall team, and assistant coach Alysia Croy said 60 are expected this upcoming spring.

“Everyone feels part of the team,” Malecha said. “You’re all included.”

The next step for the trap team is trying to become included in NHS’s roster of official varsity sports. Currently the school district sponsors the team — hence the ability to use the Northfield Raiders name and logo — but it is not considered a lettering sport.

“Most of the other teams in the [Minnesota State High School Clay Target League] can letter,” McKenzie Mathews said. “There’s no real reason we shouldn’t be able to.”

Going through the process

Heading into last spring district administrators worked with the trap team’s coaches to put a sponsorship in place and run the team through the community services recreation department.

“We’re really happy, and this is a credit to [superintendent] Dr. [Chris] Richardson, that on very short notice we could add the activity on some level and could use the Northfield High School name to support currently…what they had for a program,” NHS activities director Tom Graupmann said. “They can participate in that league, which is absolutely key.”

The Raiders don’t pay an activity fee through the activities office though, leaving its status as a “kind of” varsity sport. Similar to the recent NHS athletic additions of bowling and lacrosse, the trap shooting team must go through a district process to be approved as a full varsity sport.

The athletic advisory board’s OK is the first step in that process. It meets four or five times throughout the school year, Graupmann said, with the first meeting upcoming in November.

“The first time the idea of a trap team was brought up to me was…last December. From there conversations needed to happen. We needed to do research,” Graupmann said. “I talked to Missota Conference [athletic directors], Section 1AA [activities directors]. [I asked], ‘What kind of details can you fill me in on what we’re looking at?’ I’ve gotten some good information, and also some good information from our team.”

Graupmann said so far all the information he has received has been positive, which will be relayed to the advisory board.

“It’s been very positive about the experiences kids are having, and that holds true for our own kids,” Graupmann added. “Participation in that activity has really met the needs of the kids that have chosen to participate in it.”

Much of that comes from the nature of the sport, which gives everyone an equal opportunity to compete every week and at the state tournament.

“It doesn’t matter what your background is. What we’re all interested in is trap shooting,” Jarrett Croy said. “On a team level, we are truly a team. We don’t care if you’re tall, short, good or bad. Everyone is included.”

This upcoming spring the Minnesota State High School League will sponsor the state meet for the first time. Similar to the Northfield team’s current status though, trap shooting will remain in between a full MSHSL sport and not one at all; it will not be included in the league’s handbook of official varsity sports.

“[The MSHSL] doesn’t govern the eligibility like it does with other sports like football and basketball,” Graupmann said. “Trap’s [going to be] similar to robotics, an activity that’s sponsored but isn’t in the handbook.”

Part of the need for that distinction, Graupmann said, comes from the fact MSHSL activities can’t take place on Sundays, which is the main competition day for the Clay Target League.

“I’m not sure if there will be a next step [for the MSHSL]. There is nothing currently on the agenda saying things will change with clay target,” he added. “In Northfield, will it be a lettered activity this spring? I can’t answer that question. I don’t know if that’s something the advisory board would enact this school year. I can’t say one way or another. I do know it will be on the agenda, and it will be talked about.”

Happy about the past, optimistic about the future

Having expressed their positive experiences to this point, members of the trap team are hoping to do whatever they can to help the process to their becoming a varsity sport. They want to take part in the MSHSL state tournament along with other varsity teams.

“We would really, really like to,” Alysia Croy said.

In the case of Jarrett Croy, it may be a bit conspicuous if the Raiders aren’t there. As the state’s top shooter he led Northfield this fall with a dead eye thanks to a willingness to explore changes to his technique.

“I learned from the coaches. Some of the other people on the team have done that too. It came down to, ‘How can I improve my shooting?’” he said. “I watched YouTube videos, read ‘Trapshooter’s Bible.’ If someone says, ‘You should stand like this, shoot like this,’ I’ll try it.”

That willingness to experiment went as far as Russia.

“I watched an Olympic shooter from Russia stand absolutely straight up. It was a lot more relaxed. You can focus more on the birds,” Croy said.

That straight up approach straight up dominated this fall, with Croy and the Raiders making huge jumps forward from the spring. Malecha and Ashton Croy both finished in the conference’s top 10 for males with 22.1 averages, while Lauryn Sellner (15.3) and Mathews (14.9) were in the top 10 for females.

“The second season was definitely easier,” Sellner said. “We know now how it works at the [Morristown Gun] club. Everything just feels easier.”

All six Raiders had different stories of how they found their way to the sport, and they’re hoping they will soon have new teammates this spring with stories of their own.

“It’s a really close-knit team,” Mathews said. “It’s a good experience to be in and a good place for people to come and feel welcome.”