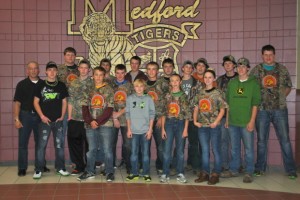 For Medford High School students who enjoy hunting, trapshooting is a natural fit.

“My dad taught me how to shoot when I was four, five or six years old,” junior Alex Snyder said. “It’s just fun to shoot.”

“Most of us shoot all the time,” junior Matt Klapperich sai. “We’re out there hunting every weekend, and we like comparing counts after each weekend.”

“There seemed to be a lot of interest here, so we talked to the instructor at (New Richland-Hartland-Ellendale-Geneva) and we both shot in Owatonna last spring,” said Tim Larson, Medford trapshooting coach. “Our team has doubled since last spring, so that’s pretty good.”

For the first time, Snyder and Klapperich, as well as 14 other trap shooters, competed in the fall, and the team did well.

“We placed first in our conference out of nine teams and had the highest score in the state,” Larson said.

There were four conferences with about nine teams each, he said.

“We compete against other schools that have the same number of participants. It’s not based on the school size,” Larson said.

According to the league website, trapshooting is one of three major sports of competitive clay target shooting with a shotgun. In trapshooting, the “clay pigeons” are launched from a single machine away from the shooter. Students must be at least 12 years old and possess a Minnesota firearm safety training certificate.

Larson said during competition weeks, each shooter — male or female — shoots two rounds of 25 clay pigeons, and the totals are sent in at the end of each week.

“As a coach of a team who can only play five, nine, 11 players or whatever the sport calls for some students have to sit on the bench sometimes, but everyone’s score counts in trapshooting,” Larson said. “Everyone gets to participate.”

Snyder said the team started fall trapshooting in mid-September and finished the season in mid-October at the Owatonna Gun Club.

And practice is key, said sophomore Nicholas Meixner, a Medford student ranked in the top 25 male shooters in the state this fall along with teammate Jake Gedicke.

“You need to shoot a lot and practice a lot,” Meixner said. “You’re never done shooting, even in the summer when there’s no hunting. There is always something to shoot.”

Snyder said hunting birds, like ducks, is the best way to prepare for trapshooting.

Larson said of the 18 Medford trap shooters, two students are from Owatonna because the school district doesn’t have a team.

One of the Owatonna students, Josie Mortensen, was the top female shooter in the state this fall.

“It was a great season for us even though the weather wasn’t the most cooperative,” Larson said. “The gun club is very cooperative and supportive of the kids. They’re great.”

Sophomore Wyatt Volkmann said he hopes the team does even better in the spring.

“It’s cool to see how you rank against other shooters in the state,” Volkmann said.

Students interested in trapshooting this spring can register in January and must be signed up by March, Larson said.

“Some students don’t know about it until we’re already shooting, so we’re hoping to get the word out this year,” he said.