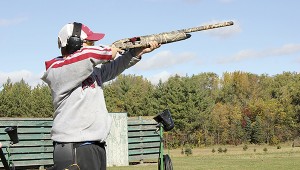 Seth Gerber, second in points on the AHS trapshooting team and ninth in the state, fires at a clay target in the 16-yeard trapshoot.

They said it thousands of times Saturday at the Cedar Valley Conservation Club during a well-attended fundraiser for the Austin High School trapshooting team.

Men, women, and shooters young and old took aim and dusted the blaze-orange clay targets on a Sunny, almost-warm day of shooting. The parking lot was full, and shooters lined all four shooting stations at the range as they blasted at more than 10,000 clays. Team manager Paul Jenkins was pleased.

“A lot more than we thought it would be,” Jenkins said about attendance. “It’s going really good. The community support has been fantastic.”

Jenkins said about 15 businesses donated to the event. That money, along with shooting fees, will go to purchase educational materials and supplies for the AHS trapshooting team. The event raised about $5,100. Team members hit the range to support their own cause, as well — members like Seth Gerber, 13.

Gerber, from Austin, is second in points on the trap team, Jenkins said, and he is ninth in the state.

“I like the outdoors, and hunting and all that,” Gerber said about his passion for shooting.

Others simply sat back and enjoyed the competition, but many wished they had such opportunities when they were in high school.

“That is the most common statement I hear,” Jenkins said. “I hear that all the time.” 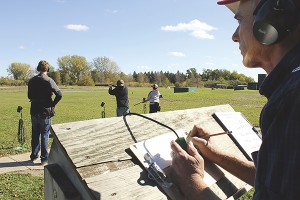 The team shoots at the Cedar Valley Conservation Club, north of Austin, while other teams shoot at their own sites around the state. Scores are then tallied and put online for coaches to compare. A peek at Austin’s scores shows they certainly keep their beads on target. Five AHS shooters are among the top 10 in the state, and one, John Ferris, is in second. For the girls, Kaylee Maxfield is fifth in the conference and 17th in the state.

The AHS trap team season ends Oct. 21 and will resume in the spring.