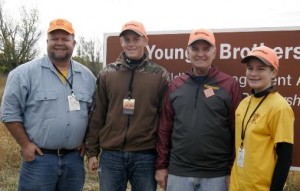 They didn’t bag a bird, but they did bag a photo with Gov. Mark Dayton.

The pair were among eight high school students — and top shooters in the Minnesota State High School Clay Target League — invited to the Governor’s Pheasant Opener. Only about 100 people got the coveted invitations, and this was the first time since the event was launched three years ago that high school clay target shooters were invited.

“The goal is to get more youths hunting, and this seemed like a natural fit,” said Dan Madsen, Madelia city administrator and an event organizer. “Everyone was excited about it. It’s something that hadn’t been done.”

Getting more kids out hunting, at a time when the number of hunters nationally is on the decline, long has been the goal of conservation groups and agencies such as Pheasants Forever and the Department of Natural Resources, both of whom sponsor youth hunts. In Minnesota, while the number of hunters has remained stable, their average age is getting older, meaning fewer young people are replacing older hunters who drop out of the sport.

The phenomenal growth of the league — 30 students at three high schools participated in 2001, and 3,400 students from more than 200 schools in the league this year — shows kids are interested in shooting sports. How many of those shooters will become hunters is unknown.

Lohse, a ninth-grader at Lester Prairie High School, was the top female shooter on her team this year. Blair was one of the top male shooters on the same team. Both break 85 percent or better of the clay targets they shoot at in competition. 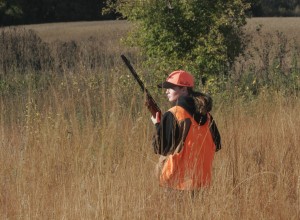 Stephanie Lohse, 14, of Lester Prairie, Minn., hunted pheasants Saturday at the Governor’s Pheasant Opener. She was one of eight Minnesota State High School Clay Target League competitors invited to this year’s event. “Not a lot of girls hunt in my grade,” Lohse said. “But I love hunting and it doesn’t matter to me that no one else did it.”

Shooting at clay targets and game was a natural for both: They’ve been hunting since they were 12, encouraged and taught by family hunters.

“Not a lot of girls hunt in my grade,” Lohse said. “But I love hunting, and it doesn’t matter to me that no one else did it.”

Jilek knows a few boys who hunt, and said he started clay target shooting to hone his skills for hunting.

Mike Bjork of Mayer, their shooting coach, also was invited to the event. He said kids approached him three years ago about forming a clay target team. Bjork, an avid hunter, agreed to pitch the proposal to the school board.

“I was a little nervous, mixing guns and school, but the board approved it,” Bjork said. “The first year, we had 18 on the team. Last year there were 34. I expect about 45 next year.”

When Bjork learned he and two of his students had been invited to the Governor’s Opener, he was thrilled. “What better way to get them involved,” he said.

“Minnesota has such a hunting heritage. This [hunting and clay target shooting] is something anyone can do. You don’t need to be a jock. And it’s something they can do their entire lives, and it gets them outside and enjoying nature.”

These kids aren’t one-dimensional, either. Lohse participates in track and basketball; Jilek plays football and basketball. Jilek played in the football team’s homecoming game Friday, and both went to the homecoming dance, then got up at 5 a.m. to make the trip to Madelia.

Jilek hunted with Stacey and Leslie Malmgren, 28-year-old twins who grew up near St. James and now live in Sioux Falls, S.D., and Nicole Davros, the DNR’s pheasant biologist. The Malmgrens have been hunting since they were kids, encouraged by dad, Dennis, a local Pheasants Forever leader. 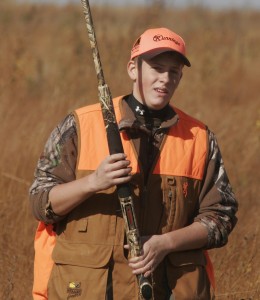 Blair Jilek, 14, of Lester Prairie started clay target shooting to hone his skills for hunting. He and Stephanie Lohse later had their photo taken with Gov. Mark Dayton.

Stacy Malmgren took the only shots the group fired at one fast-flushing rooster and missed.

“I’m happy we’re seeing birds,” she said under a bright sun and blue sky. “And it can’t be a more beautiful day.”

Considering the pheasant population is down 29 percent this year, Jilek and Lohse each saw encouraging numbers of birds, including some immature ones that were difficult to identify as roosters or hens. That neither got to demonstrate their considerable shooting abilities didn’t bother them.

“It was still fun, and at least we saw birds,” Lohse said.

“They’re such pretty birds,” Bjork said, cradling a rooster downed by a member of his hunting group.

Later, the three joined about 100 hunters for lunch under a tent, while Dayton and others spoke of the new wildlife area that was being dedicated. Then, before heading for home, a beaming Bjork, Jilek and Lohse got their photo taken with Dayton.

“That will go in the yearbook and on their Facebook pages,” Bjork said.