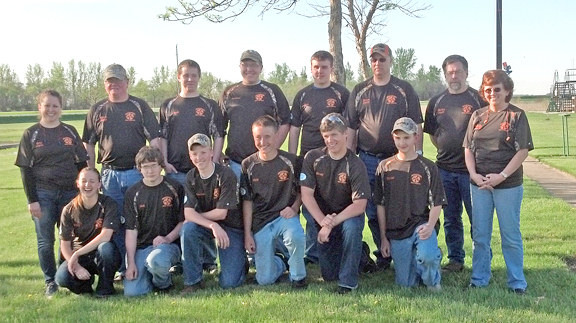 Traditional spring sports offered at Breckenridge High School include baseball, softball, golf and track and field. This year, a new co-ed sport has been added — trapshooting.

A nine-student team, the Breckenridge Big Shots, is participating in the Minnesota State High School Clay Target League for the first time. The league has been in existence for 10 years. There are 117 teams in the league, and more than 3,400 participants in the state.

The team has completed the league’s regular season, held locally at Head of the Red Gun Club north of Breckenridge and is readying for a state competition next weekend in Alexandria, Minn.

Breckenridge Big Shots is made up of eight boys, one girl, and six coaches.

This year, the trapshooting program was open to any Breckenridge High School student, grades 9-12, who had a firearms safety certificate from the Minnesota Department of Natural Resources. Organizers are hoping to open the program up to seventh and eighth graders next year.

“The first night we meet, we talk about safety,” Poppel said. “We reminded them there are safe ways of handling the firearms when they have them out, and if we see anyone handling them in an unsafe manner that they would be sent home right away, kicked off the team. Thankfully, we didn’t have to deal with that, all the kids were really good, they’re very safe. Most firearms owners are.”

The team abides by the state high school league and school district policies when it comes to extra-curricular activities, including having to keep their grades up. 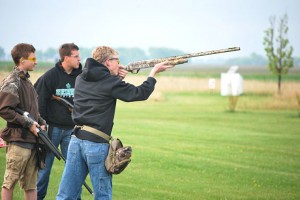 Team members paid an initial $130 to join, which includes the league’s $25 fee, with the remaining money going toward ammunition. Students provide their own shotguns, eye and ear protection. Clay targets were donated by the Head of the Red Trap Club. Students pay for additional shells as needed, Poppel said, at a reduced price offered to student shooters.

Students took their guns out to the gun club and stored them there as firearms are not allowed on school grounds.

“We’re having fun, but doing it in a very safe manner,” Poppel said. “People are always questioning if guns and school go together. To my knowledge there hasn’t been any incidents in any of the schools that have participated.”

Trapshooting requires shooters to stand 16 yards behind the thrower and shoot five rounds at five different stations on the line. A scorer marks down each target hit. Each competitor attempts 50 shots before scores are tabulated and submitted to the league. Teams are assigned to conferences based on the number of individuals participating.

“On this team, your participation counts, versus other varsity sports. Even if you’re the worst shooter on the team, your points still count, as far as our average,” Poppel said.

Before practice Wednesday night, the students gathered in the clubhouse waiting out the rain, and shared why they joined the team.

Nick Bullis said he joined because he likes to shoot trap and has been shooting for about three years.

Garrett Marple, who is also on the golf team, enjoys shooting and has been a trapshooter for four or five years.

As the sole female on the team, Emily Hendrickson said her shooting has been improving since joining the team and she said competing against the boys makes her try harder. She recommends other girls join next year.

“I shot with my dad last summer and liked it and decided to join,” she said.

Hendrickson, who also plays volleyball, is in second place for girls in the team’s conference, Poppel said.

She said the high coach to student ratio is helpful as they get to know the shooters quickly and can offer a number of helpful suggestions for improvement.

“They get to know you faster and how they should coach you, individually,” she said.

Michael Burhans, a freshman, has been shooting for 10 years, he said, and had prior experience with trapshooting. He’s looking forward to competing in the junior novice class at the state level.

Jonathan Korinek said the sport is “a lot of fun, but takes a lot of practice. You’re just not going to be automatically good at it.”

“A lot of sports are physical, you need to exercise, where this is a big mental game,” said Max Glueckert. “It’s in your head because your mind will play tricks with you. You need to focus, really focus.”

He said he likes it because it’s different than any other sport.

During the state competition, Brady Johnson said the team would be pushed to better their scores and break their own records.

“There will be a lot of people who are a lot better than you, watching, and that’s where I think the pressure is,” Glueckert added.

Nick Jirak said his biggest challenge is being consistent every time.

The team agrees that more students should try it next year to see if they like it.