Five Proctor High School and Middle School students toe their marks at the Proctor Gun Club on a cool Monday in May. It’s practice night for the Proctor and Hermantown high school trapshooting teams, and these young shooters are training for the state competition. 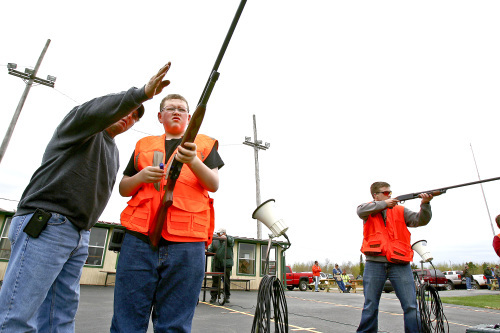 Upon Keppers’ command, an orange disc sails Frisbee-style from a bunker in front of the shooters. It can’t be 25 yards away when she touches off the shotgun. The saucer-sized clay target turns to black powder in the sky.

Each of the students will fire at 25 targets in this round, then shoot another 25 from a different station. They’re taking part in one of the state’s newest high school sports. This is Hermantown’s third year of trapshooting competition and Proctor’s first. They’ve shot most Monday afternoons since April 1 this year at the Proctor Gun Club.

“All of these kids love it,” said Michelle Holmes, parent liaison for the Proctor High School team. “They can’t wait for Monday.”

Hunter Herstad, 15, is one of 19 students on the Proctor team.

“When I heard Proctor was starting a trapshooting club, I was excited,” said Hunter, who hunts grouse, pheasants and deer. “It’s a fun thing to do and gets kids out into the shooting sports.”

His best score this year is 21 of 25, and he averages 19. Trapshooting, which he has done for a couple years on his own, helps him in the field.

“You increase your accuracy when you go hunting,” Hunter said. “This helps a great amount with pheasant hunting.”

“We’ve got some real good shooters,” said Dave Gilberg, a Proctor Gun Club board member who helps the young shooters. “Some have broken 25 straight.” 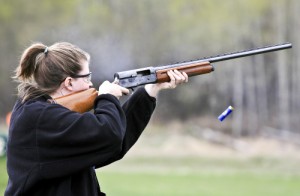 Karli Keppers, 15, of Proctor shoots at a clay pigeon while practicing for the state trapshooting championships at the Proctor Gun Club Tuesday afternoon. (Clint Austin)

Each student pays $225 to cover the cost of shells and targets for the season, Gilberg said. The sport costs the schools nothing. There’s no busing to matches. Each school shoots on its home gun range, and scores are e-mailed to the Minnesota State High School Clay Target League.

This year, 114 teams and 3,400 students are taking part, up from just three teams and 30 students in 2008. Proctor finished second in its conference this spring, and Hermantown finished third in a different conference. All of the shooters are eligible to go to state, which will be Friday through Sunday at Alexandria, Minn. Students will pay their own way to get there.

“I’d sure like to see the Duluth schools get in this,” said George Pappas, vice-president of the Proctor Gun Club.

Members of the club always turn out to help the students with their shooting techniques. 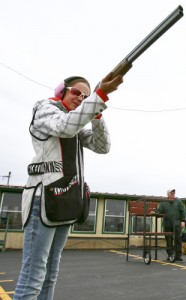 On the firing line, the shooting continues.

The targets fly. Some keep flying. Most are broken into a few pieces. Some are blown to dust.

About 25 percent of the shooters on the two teams are girls, Pappas said.

“It’s fun,” said 13-year-old Adrianna Carlson of Proctor. “I get to practice for pheasant hunting. We practice a lot and get better, and you see how you improve. All the guys here are helping me, plus my dad.”

“Once they get the taste of a good score, they’re hooked,” Pappas said.

Guy LeBlanc, one of the Hermantown coaches, said his team has fielded about 30 shooters in each of its three years in competition. One of his shooters, senior Courtney Collins, won the girls’ novice division her first year.

“Now she’s shooting in the 22s,” LeBlanc said. “She has a shot at winning state in girls’ varsity.”