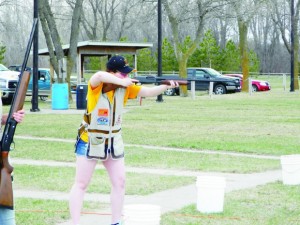 Like most high school trap shooters in Minnesota, Watertown-Mayer sophomore Maggie Bjork didn’t have any experience in the sport when she decided to give it a try competitively this year.

The Mayer resident had tried hunting with her dad before, and has always enjoyed outdoor activities, like camping, with her family. But as far as far as shooting trap goes, her only experience with the sport was the fact that her dad’s been doing it for eight years. After her father, Mike Bjork, a teacher at Lester Prairie High School, decided to form a trap shooting team at that school last year, Maggie decided to give it a try this year.

“With my dad being the coach, I just wanted to try shooting,” Bjork said. “I get to be with friends and I get to spend time with my dad.”

Bjork, one of 1,700 new high school trap shooters this year, is now part of what may be the fastest-growing sport in the state. She’s currently the only Watertown-Mayer student participating in the Minnesota State High School Clay Target League, but based on the explosion in the sport’s popularity among youth in recent years, it seems like it probably won’t be long before that changes. The number of teams and participants in the state’s high school league have both doubled every year since 2009.

The league was founded in 2003 with 30 athletes from three high schools. Those participation levels remained steady until 2009, when the league expanded to six schools and 60 athletes.

Mike Bjork said he’s not surprised by the rapid growth of the sport, particularly in more rural parts of Minnesota, especially since it was a number of students at Lester Prairie High School that initially approached him about forming a team.

“I think there are, especially in the rural part of Minnesota, there’s so many kids already involved in outdoor sports like hunting and shooting,” Bjork said. “It’s taken off because it has allowed kids that are not necessarily superstar athletes, not big football or basketball or baseball stars, to participate. And, the way it’s run right now, because a lot of the teams shoot on Sundays, kids can play other sports and can still do trap shooting because there is no conflict.”

Bjork’s team this year consists of 34 athletes, up from 18 the year before. They’re spread throughout seventh through 12 grades, and seven of the athletes are girls. The team is a cooperative arrangement between Lester Prairie, Holy Trinity and Watertown-Mayer, though Bjork is currently the only Watertown-Mayer student on the team.

“Until I got to be friends with some of the team members, it was a little difficult because I didn’t know the kids,” Bjork said. “But, after a few weeks, I felt right at home with my team.”

Trap shooting is not a sanctioned sport by the Minnesota State High School League, and the clay shooting league is independently run. Students pay a fee to participate and cover expenses, but most schools do recognize athletes with varsity letters for participation.

Teams compete within conferences based on the number of athletes on a team. Lester Prairie/Holy Trinity/Watertown-Mayer competes in Conference 10A with teams like Belle Plaine, Glencoe-Silver Lake, Anoka, Bloomington Jefferson, St. Anthony Village, Lincoln High School of Thief River Falls, and Pine River-Backus-Pequot.

Each team actually shoots on their own at a designated time, and then submits their scores online. LPHTWM competes on Sundays at the Lester Prairie Sportsmen’s Club.

LPHTWM finished third in the conference during its inaugural season last year, and Bjork said the team is leading the conference by a considerable margin this year. The state meet is held at the end of the year, where any athlete that wants to is allowed to enter. Bjork said 29 of his 34 athletes will compete at this year’s state meet, which is held June 7-9.

With the success of their team and the rapid growth of the sport statewide, the focus for the Bjorks now is trying to drum up more support among Watertown-Mayer students.

“I was a little disappointed we didn’t get more Watertown kids to come over,” Bjork said. “We’re starting to generate some interest for next year. I’m hoping we can get a half dozen or more from Watertown to come over. Or, Watertown could even develop their own team. That’s ultimately what the clay target league would like to see. They’d like to see high schools come up with their own teams to continue to grow the program.”

The only requirement for a school starting its own team is that it have at least five members, and athletes are required to have their firearms safety certificate from the DNR. Maggie Bjork said she’s also hoping to recruit a few friends for the coming seasons.

“I have talked to a few other kids about the team,” she said. “It would be nice if we had a few more Watertown-Mayer kids. I know there are other kids that would enjoy the sport.”