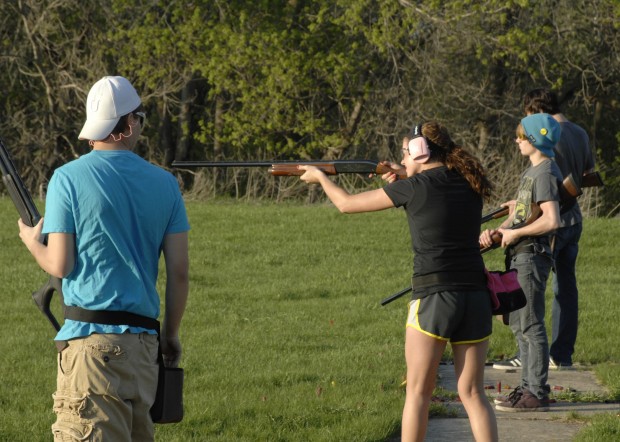 Sydney Klimesh, gun up, prepares to fire on a flying clay target at the Wanamingo Sportsman’s Club last Wednesday. Note the straight form and shooter’s weight on the front leg. (Terri Washburn/Kenyon Leader)

Pink shotgun shells. Pink shooting headphones. Pink ammo bag and gun case. The list could go on. Suffice it to say, Sydney Klimesh is really getting into the the new clay target shooting sport offered by the Kenyon-Wanamingo High School. And she’s not alone.

Twenty-one students overall, 16 guys and 5 girls have been dedicating their Wednesday nights to marksmanship, not an easy task this spring as winter reached its icy grip far into the first two weeks of May. The first practices were held in the ice and snow. Only recently did the sun shine on the marksmen and their clay targets.

Coach Rich Kincaid, ecology instructor at K-W and an avid outdoorsman, said the group has been hardy. Their schedule has been three weeks of practice followed by five weeks of competition. Unlike other sports, trapshooting competitions in the MN High School League are held concurrently. Each team shoots at their own range(s) and the scores are recorded and entered into the system each week electronically.There are seven teams in the 6A Conference that K-W plays in, with the schools being different than the other athletic sports’ conference.

The K-W team is fortunate enough to have support from both the Kenyon and Wanamingo sportsman’s clubs. Without assistance and acceptance from these groups, the venture would not have happened. The clubs provide a shooting range and clay targets, as well as extra help to oversee and mentor the young shooters. Some students pick up extra practice by shooting at both ranges on Wednesdays.

Local sportsman and blogger Jim Braaten, donated T-shirts and ball caps for each K-W team member. He also donated to the Kenyon Sportsman’s Club the ammo pouches used by many of the students.

Kincaid explained how the trap league operates. Each youth shoots two rounds of 25 -that’s five shots at each of the five stations on the trap range. Shooters stand next to each other at each station and take turns calling for the clay pigeon and taking one shot. After five rounds they rotate right, with the end person coming around to the first position. 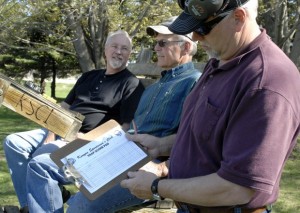 Physics instructor Darin Walling assists Kincaid with the score tabulation and league stats, as well as helping out on the range. School Resource Officer Jason Nurnberg assists the program.

On the Kenyon range last Wednesday afternoon, John Maki and Lance Schuster recorded the stats as each student aimed for the flying clay targets. Larry Walker directed the shooters on the range. Walker worked for three years to start this program, and said he loves to see the excitement in the kids about the sport. 2013 is a trial year for the team, as it is not yet an official K-W sport with all the support that entails.

While the regular season is nearly at an end, the state tournament will be held at the Alexandria Shooting Park in Alexandria, MN on June 7-9. Individual and team champions will be determined and recognized at that competition.

Kincaid is hopeful. He said it is neat to see the difference in kids between the classroom and out on the range. He said the students are well-behaved and very focused in the hands-on experience they receive. Students must have a Firearm Safety Certificate to be on the team, and supply their own shotgun, hearing/eye protection and ammunition. 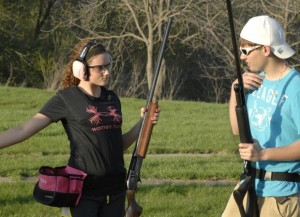 The pink accessories make it more fun, but Sydney Klimesh is a serious competitor when it comes to clay targets. (Terri Washburn/Kenyon Leader)

Kyla Kincaid, Kailee Berquam and Erin Gudknecht were out on the Wanamingo range last week, obviously enjoying the sport. Kyla shot her first turkey this season, and her father credits it to the fact that she has had so much practice shooting this year with clay targets.

Trap shooting is one of the only high school sports that offers head-to-head competition between male and female marksmen, a fact that the students have had some fun with. The trap range is a great equalizer, said Kincaid. All that matters is how well they can focus and shoot.

Team member Sydney Klimesh says she received her shotgun from her grandfather, but had never fired a gun prior to the first practice. Walker tells the story of how on week three, Sydney and fellow shooter Jesse Revland were on the line together. During the first round, Jesse beat her by one point 8-9, and was relishing the win. But in the second round, Sydney hit 19 to his 9 shots.

Sydney said trap shooting is different than other school activities and sports, and she likes that. She is on the softball team and plays the trumpet in band. It is a more diverse group of people than the typical jock crowd, and she has gotten to know and like her new team members.

Clearly enthused by her new-found interest, Sydney was not shy about her love of the sport.

“I wanna shoot so bad!” she exclaimed. “This is like the highlight of my week.” 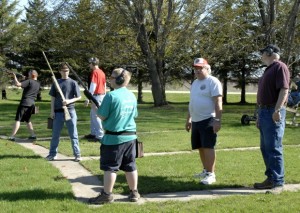 Eli Bushman, in first shooting position, waits for his turn. At the right are Larry Walker and Rich Kincaid. (Terri Washburn/Kenyon Leader)

Other students share her sentiments. Jon Schultz said he loves shooting sports because it gives him something to do during the school season and provides more shooting time. Erin Holk said he joined because it’s a different kind of sport, and he thought he could be good at it.

On the range in Wanamingo last Wednesday, sportsman Shane Lunde noted that the Department of Natural Resources is actively pushing to get kids involved in outdoor activities. He enjoys seeing youth get into the sport. The outdoors community is supportive of this program, he added. At this year’s Wanamingo Sportsman’s Club banquet, he said, when we talked about the high school league, people gave a standing ovation.

The support and level of participation this K-W team is experiencing is not surprising.

“This is the fifth consecutive year that the league has doubled in teams, schools and athlete numbers,” said Jim Sable, executive director of the Minnesota State High School Clay Target League.

Will it be a sport of the future for K-W students? The answer lies with the district and the school board. Kincaid said there are factors he is still working out, and one big item on his wish list is a huge secure gun safe that students could use.

“Maybe we will get a corporate sponsor?” he said with a smile.