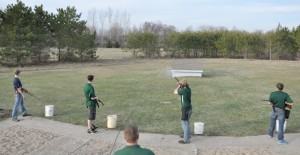 Those are the traditional spring sports played at most high schools in Minnesota, but a new offering is making its debut at Litchfield and Eden Valley-Watkins high schools. Both schools are first-year participants in the Minnesota State High School Clay Target League.

Since its inception in 2001, the Clay Target League has developed into the fastest growing sport in the state. Only three schools participated in the league from 2002 to 2008. That number has swelled to 215 schools and more than 3,400 shooters for the 2013 season.

“I wanted to do the trap shooting rather than be in baseball,” Litchfield freshman Connor Hoff said. “I think it’s really fun, and I get to hang out with my friends and do something that I like. It’s been a blast for me.”

The Litchfield school board approved the formation of a team in October and Schoolmeesters has spent the last six months building a program from scratch. “We had our first meeting in the first part of December,” Schoolmeesters said. “At that point we had 21 kids interested.”

Without a trapshooting range in Litchfield, Schoolmeesters needed to find a home for his team. He contacted the Eden Valley Sportsman’s Club, which agreed to host the Litchfield and EV-W teams. That partnership has benefited the teams for insurance purposes and practice time. The Litchfield team shoots on Monday nights and EV-W is scheduled for Tuesdays, but students can switch nights if they have a scheduling conflict. “It’s nice to have the versatility,” Schoolmeesters said. 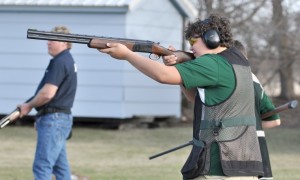 How does it work?

The trapshooting program is open to any student in grades 6-12 who has a firearms safety certificate from the Minnesota Department of Natural Resources. “Anybody can do this,” EV-W coach Fred Johnson said. “We have eight on our team and two of them are girls. In one of our (adult) leagues, we’ve had someone shoot out of a wheelchair. It really is open to anyone.” Team members paid $150 to join the team and most provide their own firearm. Things like shotgun shells, clay targets, eye and ear protection and team shirts have been paid for by donors. “We’ve had a lot of help,” Johnson said. “When you are asking for anything involving kids, it’s not too hard to get donors.”

Trapshooting requires shooters to stand 16 yards behind the thrower and shoot five rounds at five different stations on the line. An official scorer marks down each hit target. Each individual attempts 50 shots before scores are tabulated and submitted to mnclaytarget.com. Teams are placed in conferences based on the number of individuals participating on each squad. 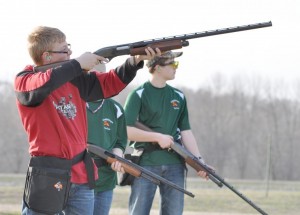 Eden Valley-Watkins sixth-grader Grant Johnson takes his turn on the range with members of the Litchfield Clay Target League in Eden Valley.

Monday was Litchfield’s first official competition and Schoolmeesters noticed vast improvement from his shooters. “Compared to the first night in early April, we’re probably up 25 percent,” Schoolmeesters said. “It seems like they are having fun so far.”

Teams will compete through May and individuals can participate at the state tournament June 7-9 in Alexandria.

For now, Litchfield’s shooters are just focusing on improvement and having fun.

“It’s one of the few sports that doesn’t matter what age you are,” Hoff said. “Boy or girl, young or old, the only thing that matters is how good you can shoot. It’s cool that way.” “If someone said I had to give up all my sports to be in this, I would do it,” Penk said. “I know for sure this will make me a better and faster shot. I thought I was a pretty good shot at the start, but I know I have a lot of room to improve.”