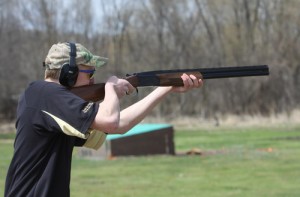 Currently, 114 schools in Minnesota have trapshooting clubs — including East Ridge and Woodbury high schools — and roughly 3,400 kids are participating in the sport.

With the amount of gun violence in the country today, putting firearms in the hands of high school students may seem counterproductive to some. However, that’s just what’s happening as the sport of trapshooting is growing rapidly in area high schools.

Currently, 114 schools in Minnesota have trapshooting clubs — including East Ridge and Woodbury high schools — and roughly 3,400 kids are participating in the sport. Last week it was deemed trapshooting will have the backing of the Minnesota State High School League in 2014. The MSHSL will be a “presenting partner” of the sport and will help host a state tournament each spring.

“Since it was founded in 2001, there have been zero injuries,” Fabro said. “Anytime there is a nice, safe environment that is a positive experience for kids and families to participate in, that’s something I want to support. There’s not the stereotypical good-old-boy stuff going on here.”

Trapshooting, one of the nine shooting events presented in the Olympics, is one of three competitive clay pigeon shooting disciplines. In trapshooting, clay pigeons whirl out of machines at over 40 miles per hour. The shooter’s goal is to explode the pigeon with his or her shotgun. The other shooting disciplines are skeet shooting and sporting clays. Unlike trapshooting — where targets are launched from a single machine one at a time — in skeet shooting, targets are sent from two houses simultaneously in paths that intersect in front of the shooter. Sporting clays most resembles bird hunting as it includes a more complex course in which clays are launched from a variety of targets.

East Ridge head coach Mike Haas competes internationally for Team USA in sporting clays. At 42, he’s been shooting since he was 10 years old. He started target shooting in his mid-20’s and has also been coaching youth sports for over 20 years.

“Pretty much every target shooter at one time started because they wanted to hit more ducks or pheasants or something like that,” Haas said. “Those of us who enjoy hunting enjoy target shooting for the same reasons. There’s just something about shooting a target and having the immediate satisfaction of watching it break. There’s something visceral about it that’s addictive in nature.”

Haas said high schools have a commitment to try and get as close to 100 percent participation in extra-curricular activities for all students. Because of that, Haas said he feels people should support trapshooting clubs in schools. 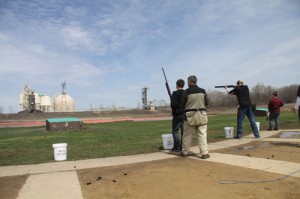 “Club sports are really important for kids that aren’t involved in sports like baseball or lacrosse in the spring,” Haas said. “This is an opportunity for them to represent their school and have the pride of doing that. For every spot on our team there’s a kid that wants to put on the East Ridge jersey and represent their school.”

East Ridge freshman Jake Fabro is a member of the Raptors trapshooting team. He also runs cross country and track and competes in Nordic skiing for East Ridge.

Jake Fabro said he hunts “a lot” and shoots clays to improve at hunting, but also enjoys trapshooting as a sport.

“It’s a challenge. Some people don’t realize it, but it takes a lot of skill,” he said. “It works with the other ones. The other sports are more physical and you do it every day of the week. But, this is a little more skill-based than the other sports I play.”

“I like to compete with my friends,” he said. “We get to compare our scores and be competitive. I like that. It’s fun to practice and improve your own skills. There are people that are anti-gun people. I hope they know this is completely safe and even if they don’t like guns they could probably have a lot of fun doing this.”

Coaches and activity directors said they haven’t heard any complaints from anti-gun groups or even concerned parents.

“Whenever working with a deadly weapon, we want people to recognize that it’s a deadly weapon and take the necessary precautions,” Protect Minnesota Executive Director Heather Martens said. “Anything done with firearms should be done safely.”

Martens said her organization isn’t “anti-hunting” but works to end gun violence and advocates gun safety. She said Protect Minnesota has gun safety booklets available at police stations around the state or by contacting them through their website.

Trapshooting is new to East Ridge this year. There are 50 kids on East Ridge High School’s inaugural trapshooting team. Woodbury High School has 20 participants. Park High School doesn’t yet have a trap team, but Park Activities Director Phil Kuemmel said one could be formed as soon as next year.

“I think we’re getting closer and closer,” Kuemmel said. “I’m sure we have a student population that’s interested in this, but I haven’t had any students come to me saying we should get a trap team together. We’re not there yet, but if it’s next year or beyond I see us hopefully having enough student interest that we can get a team at Park.” 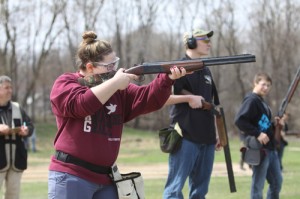 Members of trapshooting teams shoot 50 clay trap targets each week at South St. Paul Rod and Gun Club under the direction of coaches and range safety officers. Participants must possess Minnesota DNR Safety Certification or obtain certification through the booster club in order to participate. Cost to take part is roughly $200 per season.

“I was extremely impressed with the talent, interest and school spirit that the participants demonstrated throughout the event,” Gonnion said. “We’ve been very fortunate to have head coach Herb Struss and some remarkable parents lead this group of students as they improve week-by-week on their skills – it’s very impressive to watch in person.”

With trapshooting, at no time are the guns allowed on school property. Students pick up the guns at home after school and go directly to the club. Also, schools may have safes at the gun clubs so kids don’t have to cart the guns around.

“Growing up, when I was my son’s age, we’d have the shotgun in the car, because we’d go hunting after school – it wasn’t a second thought,” Scott Fabro said. “Today is a different world and we need to be respectful of those who may have a different view so that they can see it can be a positive influence.”

Haas said roughly two-thirds of the kids who came out for the trapshooting team at East Ridge this year already had their gun safety permits and came from hunting families, but the other third of the families didn’t own a gun before this season. Haas said kids can letter in trapshooting at East Ridge and that there are college scholarships available to students.

“The shooting community has really noticed over the last 10 or 15 years that we haven’t done a good job recruiting young people and we’ve really become concerned about the future of our sport,” Haas said. “The aging demographic of our sport has been concerning. But, to see all these kids getting out and shooting targets has been really, really exciting.”