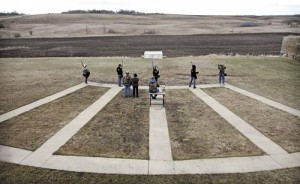 Tuesday night at Lakes Area Shooting Center, there were Fergus Falls letterman jackets next to camouflage ones. There were short students next to tall, big students next to small, freshmen next to upperclassmen and every high school stereotype wrapped into one trapshooting team.

Fergus Falls, Minn. – Tuesday night at Lakes Area Shooting Center, there were Fergus Falls letterman jackets next to camouflage ones. There were short students next to tall, big students next to small, freshmen next to upperclassmen and every high school stereotype wrapped into one trapshooting team.

It didn’t matter if they were the blond-haired girl or the nerd with jeans ready for a flood fight. All that mattered was the target.

The MSHSCTL will still hold its annual tournament in Alexandria where all shooters in the league are invited, but the MSHSL-sponsored event will be the best of the best.

“Not every kid is cut out to be a football player or a basketball player,” Sable said. “Not every kid is big, strong, muscular, fast or agile. Some are just plain average kids, but they would like to represent their school in something. With trapshooting, it takes concentration, it is a mental sport and it takes good hand-eye coordination, but you can be 105 pounds or 305 pounds, and both can participate right alongside each other.”

Whether or not the orange clay targets blew up among the rain clouds Tuesday or floated toward the ground without a scrape, the students on Fergus Falls’ first trapshooting team were representing their school, and that’s the aim for any high school.

“They are independent providers, so they pay for everything, but they want our students to get a varsity letter,” Fergus Falls Athletic Director Gary Schuler said. “Most of the 20 on the team, this is the one thing they participate in, so this gives them an opportunity to compete, learn more about a lifetime skill that they like, and that’s what most activity department philosophies is.”

Sable, 74, retired in 2001 and noticed the Plymouth Gun Club, for which he was a member, was a bit on the older side. The average age of the 150 members was 56. After doing some research, he found out that was young for the state of Minnesota, as the average age of a gun club member was 60. As a man who had seen the farms he used to hunt on in Osseo turn to suburbs, Sable did not want to see a sport he loved disappear again.

“It didn’t take me long to realize our future was behind us if we didn’t find a way of attracting young people to the shooting sport,” Sable said. “I knew it had to be bigger than the Plymouth Gun Club. We needed to try to involve the whole state in it.”

Sable saw an ad in the bulletin for Orono schools looking for mentors in 2002. He made a call saying he’d like to take five kids and teach them to shoot. Sable got six kids in 2002 and for the 2013 season, the MSHSCTL will have 3,400 kids on 115 teams representing 215 high schools.

“This is the fifth consecutive year the league has doubled in teams, schools and athlete numbers,” Sable said. “It’s Minnesota’s fastest growing sport.”

In December of 2012, the MSHSL offered to co-sponsor a state tournament in June of 2014 after the MSHSCTL went before the board looking for trapshooting to become a sanctioned sport.

“There was an interest,” MSHSL Executive Director Dave Stead said. “A number of students and schools had expressed an interest, and the activity began to grow in size and our board said that we would be interested in being a presented partner of a state tournament, but it is not a fully league-sponsored program.”

That’s enough for Fergus Falls sophomore Katie Iverson, who has been shooting since she was 6 years old. Her dad, Jerry, who was a Marine, taught her about guns growing up, and the two go hunting every year.

“I like how it’s a never-ending challenge,” Iverson said. “You can get as good as possible, but you’re still probably going to miss one or two now and then. It’s always cool to get to do something you love. When I heard about it, I signed up the next day.”

Same goes for Fergus Falls sophomore Tyler Harthun, who just started shooting a couple years ago with his dad.

“I thought it would be cool because I could do something I could possibly letter in and something I normally do and really enjoy,” Harthun said. “When I hit my target, it’s like, ‘Did I actually just do that?’ ”

As for the taboo of guns in the hands of high school students, every student must possess a Minnesota Firearm Safety Training Certificate to join.

“It’s a controlled environment, and we wouldn’t be able to fire one shot without a safety course,” Harthun said. “We have trained professionals with us all the time.”

The average age of the Plymouth Gun Club is now 40, Sable has two granddaughters in the MSHSCTL, and there’s varsity letters in the rooms or on the jackets of high school kids all over the state of Minnesota thanks to Sable. For most shooters, that’s a bull’s-eye.

“Well, there’s 49 more states,” Sable said. “We have interest in North Dakota. I have just sent an email to the executive secretary of the North Dakota high school league and told him that I’d like to talk to him about that.”