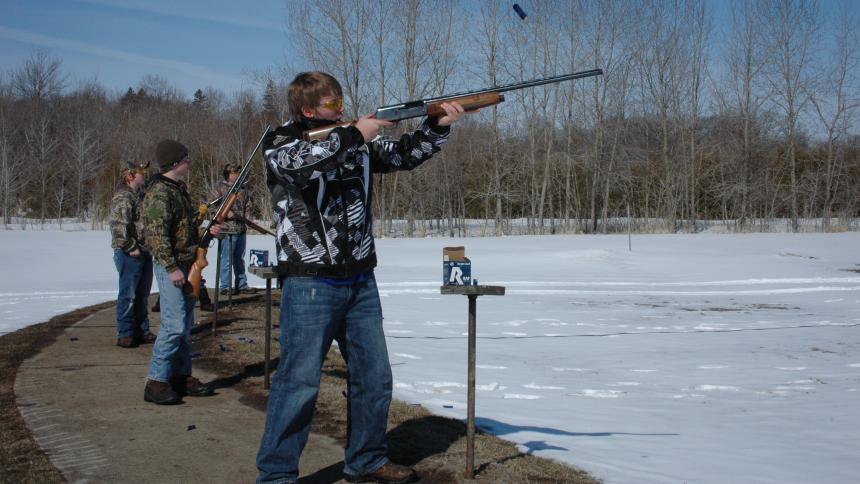 Reid Miller of the Wadena-Deer Creek Wolverines clay target shooting team fires a round during practice April 20 at the Knob Hill Sportsmen’s Club.

Clay target shooting competition in Minnesota has been around for several years but this is the first season for WDC students. Kids in grades 7-12 are eligible if they have a gun safety training certificate.

“It’s been great,” Gallant said. “We’ve been stressing safety in our teaching and shooting.”

The Wolverines compete in the six-team Conference 6A along with Brainerd, Cretin-Derham Hall, Kenyon-Wanamingo, Le Sueur-Henderson, New Richland-Heartland-Ellendale-Geneva and Woodbury.

Each team competes virtually in a conference against teams with similar team size, hence the scattered locations of the schools in WDC’s conference, and the lack of travel expenses.

Competitors supply their own shotguns, either 12 or 20 gauge, but the target load shells are purchased by the teams.

According to a league website’s FAQ section, all participants contribute in the team competition with the one round that they shoot. If an athlete shoots the top score (out of 50) on the team, their score is used as the “High Gun Score” that contributes one-third of the points for the overall team score. “Top Performers” uses the top score average from 50 per cent of a team, (minimum of five) and contributes to 1/3 of the points. Team average uses all scores for the remaining one-third of total team scores. A true team scoring system (similar to track and swimming) is used and a team competes against all teams within their conference each week. The highest total of points achieved by the team at the end of the competition is the winner.

“The sportsmen around the area have been incredibly supportive,” Gallant said. “This should cost about $250 a kid and right now they pay about $25.”

Following completion of the six-week virtual season, a head-to-head competition of the spring league is set for early June in Alexandria.