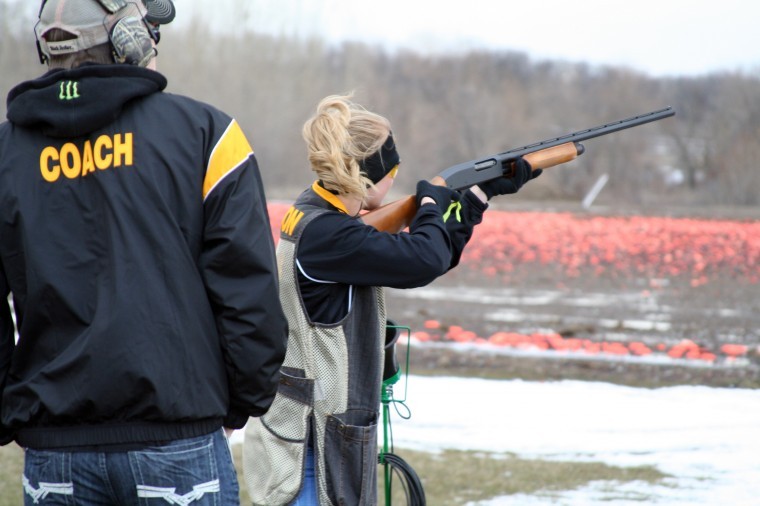 Burnsville High School junior Hailey Peterson shoots at a clay target during the Burnsville-Eagan-Savage Trap Shooting Club’s first competition of the season on Wednesday, April 24 at Minneapolis Gun Club in Prior Lake.

Trap shooting is the fastest growing high school sport in all of Minnesota – going from 60 participants in 2009 to 3,400 in 2013 – something staff and parents in the Burnsville-Eagan-Savage School District have witnessed first hand.

“I think a lot of it was just word of mouth,” said Kathy Jarnagin, a parent volunteer who does most of the organizing for the club. “I don’t think people really knew about it, [but] once people started learning about it… it kind of exploded.”

Burnsville-Eagan-Savage’s Trap Shooting Club is not officially sanctioned by the district, although an agreement has been made to provide letters for students who meet participation requirements. The group started in 2011 with 20 members. It doubled to 40 in 2012, and the team now has 55 members for the just-started 2013 season.

Jarnagin said that most of the time, they aren’t introducing kids to the world of shooting. Rather, they’re taking kids who have already been raised to hunt and shoot for sport and giving them a chance to use their talents in a sanctioned setting.

“The vast majority of our kids, they know how to shoot, we’re just giving them that opportunity to compete,” said Jarnagin, whose son Adam, a ninth-grader at Eagle Ridge Junior High, has been on the team since its inception in 2011 and is one of the team’s best shots.

The club is open to District 191 students in grades 7 and up, and Jarnagin called it “the only truly co-ed sport in high school.” Three of the club’s members are girls.

It may be called a club, but that doesn’t mean its members don’t engage in some hardcore, high-stakes competition. The club is part of the Minnesota State High School Clay Target League, a 501c3 nonprofit corporation, which pits teams against each other teams from across the state. The teams compete virtually, meaning that they shoot at their home shooting range (Burnsville-Eagan-Savage shoots at the Minneapolis Gun Club in Prior Lake), record the scores and post them online. The teams then compare their scores and declare a winner.

But just because the opposing team isn’t competing at the same site doesn’t mean the sharpshooters feel any less pressure.

“It’s really intense,” said Burnsville High School senior George Bachrodt, who was named one of the team’s captains on Wednesday, April 24, the first day of competition.

One of the most obvious benefits kids receive from the club is a respect for guns and gun safety.

During the competitions and practices, there is a gun safety officer and a coach at each of the stations. Meyer said he and his fellow coaches continually preach gun safety to the kids, but that most of the time, the kids are way ahead of them.

“They know what the heck they’re doing,” Meyer said. “They probably know more about gun safety than 90 percent of the population.”

In addition to learning gun safety and shooting skills, such as proper footing and technique, trap shooting has other benefits as well. Of course, the students have to have a working knowledge of physics to hit a moving target, but it also teaches the kids focus, patience, teamwork and perseverance, said Meyer.

But perhaps just as important is the fact that the kids are having a blast. Literally.

“It’s just fun to get out here and shoot with all your friends,” said Burnsville High School senior Brock Quade, who was also named one of the team’s captains on Wednesday.

“It’s kind of an upper, and after a long day of school, it’s a really good stress reliever,” said Bachrodt.

It also gives the students an opportunity to meet and hang out with peers who share a similar interest but might not have met otherwise, Bachrodt said.

Another benefit for club members is the fact that they can now earn a letter for their participation in the club, much like a football or volleyball player would. During a School Board meeting last June that was attended by several members of the team, the Board approved a resolution granting the opportunity for trap shooting club members to earn a letter.

By having the opportunity to letter in the sport, Bachrodt said, trap shooting gains more credibility among their peers and helps promote the club to others who might not know about it.

Some people may question whether trap shooting should be considered a sport, but the way Quade sees it, it takes skills, focus and clutch performances just like any other athletic competition.

“People look at the sport and think it’s easy, like they could just walk out there and do it,” Quade said. “But once you get out there, it’s really hard to hit all the angles and judge how [the discs] are flying and what direction they’re going… You really have to get your technique down.”

“And weather is a huge factor,” added Bachrodt.

Guns have been in the news a lot lately, and not for positive reasons. But Meyer insists that guns can have positive uses, and that high school trap shooting teams are just one example of that. He also said that by teaching youngsters how to safely handle and store guns, those kids will grow up to teach the next generation how to respect and handle guns.

Meyer said that if he was approached by a parent of a teen who was interested in the club, but the parent was apprehensive about letting the teen join, he would tell the parent to consult other parents who have a child in the club.

“The idea… probably scares a lot of parents, especially ones [who haven’t shot before],” Meyer said. “But other parents will tell you, ‘This is how it’s organized, this is what [your kid] will get from it.’”

Jarnagin agreed. “Just go talk to the other parents,” she said. “They’ll tell you what it’s all about.”