About 35 Thief River Falls students participate in a co-ed trapshooting program offered through the Minnesota State High School Clay Target League. This is the first year the young Thief River Falls shooters have participated in the league, and organizers say interest has far exceeded their expectations. 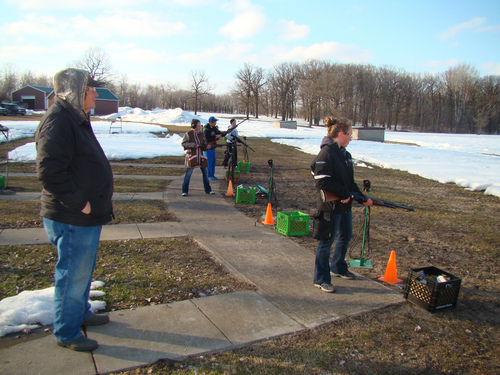 “She couldn’t hit the broad side of a barn,” Kasprick, of Thief River Falls, said. Kasprick decided to take his daughter to the Thief River Falls Gun Club, where he’s a longtime member, to let her practice at shooting clay targets.

Well, she can hit the broad side of a barn now. She’s also pretty good at hitting clay targets. “She started out shooting sixes last year and was shooting 21s at the end,” Kasprick said, referring to Alyssa’s scores in a 25-target round. “So, it works out pretty well.”

A seventh-grader at Franklin Middle School, Alyssa, 13, this year is among about 35 Thief River Falls students participating in a co-ed trapshooting program offered through the Minnesota State High School Clay Target League. This is the first year the young Thief River Falls shooters have participated in the league, and organizers say interest has far exceeded their expectations.

According to Tony Dorn, president of the Thief River Falls Gun Club and Northwest Sporting Clays, club members decided to approach the school board about the program this winter after learning about its success in other parts of the state.

The School Board approved the program but doesn’t provide funding like it does for sanctioned sports such as hockey, basketball or volleyball, Dorn said.

“We were kind of thinking the first year we’d maybe be looking at 15, 17 or 18 kids, and we’re hovering right around the 35 mark,” Dorn said. “I see it as nothing but going up with numbers in the future, based on the response we’ve had.” 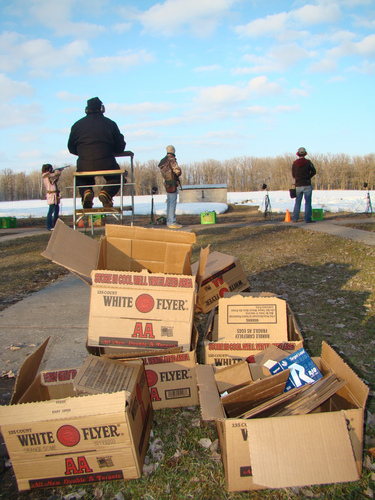 Katie Shaw, an agriculture teacher and FFA adviser, worked with the gun club to promote the program among students and get them registered. Shaw, whose students used to participate in a state FFA trapshooting contest, said she wasn’t surprised by the interest. The Thief River Falls program is open to students in grades 6 through 12 who have completed firearms safety training.

“I kind of knew it was something that would go over well,” Shaw said. “I think it’s great they’re willing to practice in a safe, controlled environment.”

Tuesday night, the grounds beyond the firing line at the Thief River Falls Gun Club remained buried under more than a foot of snow, but the line and shooting stations were clear. The lingering winter has hampered most spring sports, but a local construction company came in with heavy equipment to open the road and clear the area near the shooting line, and the students have been shooting every Tuesday night since April 2.

“It’s kind of fun,” Dorn said. “Softball can’t do it, track and field has been locked down, and the kids are out here shooting.”

After two weeks of practice and a “reserve week” that will count if bad weather cancels a regular league night, the official trapshooting competition started this past Tuesday night and continues through May 28. Team members shoot two rounds of 25 targets, and Shaw submits the scores online to the state league.

Conferences are based on the number of shooters rather than enrollment, and Thief River Falls is grouped with Anoka, Belle Plaine, Glencoe, Bloomington Jefferson, Lester Prairie, Pequot Lakes, Backus and St. Anthony Village.

“The kids can be in sports and still do this because if they’re not out there on a particular week, it’s just a scratch and doesn’t count against the team score at all,” Shaw said. “They just take the team average.”

Thief River Falls isn’t the only northwest Minnesota school participating in the league. Crookston, Badger-Greenbush-Middle River and Marshall County Central in Newfolden, Minn., also are in their inaugural seasons, and Lake of the Woods School in Baudette, Minn., is onboard for its second season.

It’s all part of a trend that has seen the Minnesota State High School Clay Target League grow from three teams in 2002 to 114 teams and 3,400 shooters from 215 schools this year. Like sanctioned sports, some of the teams are cooperatives with shooters from more than one school.

“It’s just gone berserk,” Dorn said. “I think it’s just an opportunity for kids to be able to participate in something. They don’t have to be the quarterback on the football team. They don’t have to be the star girls’ volleyball player. They can be kids who have a passion for the outdoors and shooting sports and go out there and compete and have fun and not have that other level of commitment.” 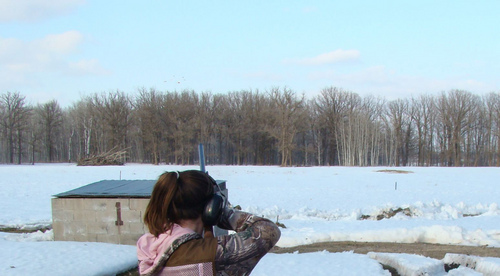 Luke Novacek, who oversees the Greenbush program, said he has 15 boys and three girls shooting this year, including three from nearby Roseau, Minn. For the first year, at least, Novacek said organizers decided to limit the program to ninth grade and older.

“We didn’t know how it would go,” Novacek said. “Had I gone down to eighth grade, I could have gotten five or six more easily.”

Trapshooting, which requires shooters to stand 16 yards behind the thrower and shoot five rounds at five different stations on the line, is a lot different than setting up a thrower at the farm and shattering a few targets, Novacek said.

“It’s a whole different ballgame,” he said. “It’s fun to watch the scores increase. We’ve gotten a running sheet going and watch them go up each week.”

Like Thief River Falls, Greenbush had to bring heavy equipment in to clear snow from its shooting range, Novacek said. The six students from Marshall County Central, by comparison, shoot with Thief River Falls every Tuesday night.

“You can’t put a price tag on the one-on-one instruction they get out here,” said Cody Gustafson, who’s in charge of the Newfolden program.

Aside from shotguns, costs for the students are minimal, organizers say.

“We’ve had just a wonderful outpouring of local support,” Dorn said. “We’ve had multiple businesses that have stepped up and contributed to the program.”

Pheasants Forever and the MidwayUSA Foundation and Scholastic Shooting Trust, a public charity, also contributed $10,000 to a trust the Thief River Falls program can use to offset expenses, Dorn said.

“We have really taken pride to offer our facility to these kids and minimize some of the costs,” he said. “In the metro, some of the teams have to rent time at different gun ranges so to be able to offer this — and Crookston is the same way — just the way our culture is up here, the clubs have let these kids use the facilities.

“We would never be open now, normally, and we are and letting them have fun.” 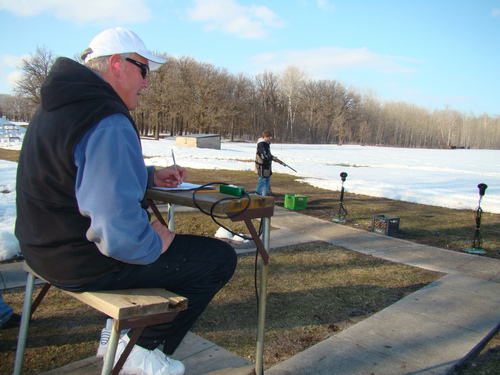 Fun was in abundance Tuesday night, and while Dorn said the league isn’t about who shoots the highest score, the smiles and satisfaction were apparent every time a target exploded into dust.

“I improved a lot from last week,” said Ann Skalsky, a sophomore at Lincoln High School in Thief River Falls who has hunted geese and shot trap through FFA. “Last week, I shot five and seven, and this week 15 and 13.”

Through help from volunteers such as Al Steinhauer, who worked with her Tuesday night, Skalsky said she was able to refine her shooting stance and other techniques.

“Last week, I wasn’t following through all the way,” she said.

Alyssa Kasprick also had reason to smile after she finished shooting two competitive rounds and a practice round.

That might not bode well, for waterfowl, pheasants or grouse come hunting season.

“I was blessed with two daughters, so I’m going to give them the opportunity to hunt like a boy, and this is part of it,” Paul Kasprick said. “It’s fun to see them out here. It’s a good time.”