High school trapshooting teams have become so popular in Minnesota that some have had to turn away students because the gun clubs where they compete can’t handle any more traffic.

This season 21 new teams from the metro area joined the Minnesota State High School Clay Target League, which now has 114 teams and more than 3,300 participants competing across the state. Among the new metro teams are St. Thomas Academy, Bloomington Kennedy and Jefferson, Lakeville North and South, Mound Westonka, Coon Rapids, Andover and Anoka.

It’s also the first season to begin since the Minnesota State High School League voted to put its sanction behind a state tournament for the sport, believed to be the first such arrangement in the country. The tournament, still a year away, is the result of a “presenting partnership’’ agreement with the Clay Target League that was approved by the high school league in December.

The agreement essentially establishes a tournament that will be exclusively for elite trap shooters. But in a departure from varsity sports such as football and hockey, the Clay Target League will continue to have its own June tournament, which invites every league member to participate.

The high school league measure passed on a 9-8 vote, reflecting some uneasiness about linking member schools to a sport using guns, especially against the backdrop of an emotional national debate on gun control.

Jim Sable, who started the Minnesota State High School Clay Target League in 2001 to improve the future vitality of gun clubs by getting younger kids involved, has seen the debate up close.

“Back then, you couldn’t use the words ‘kids,’ ‘guns’ and ‘schools’ in the same sentence,” Sable said. 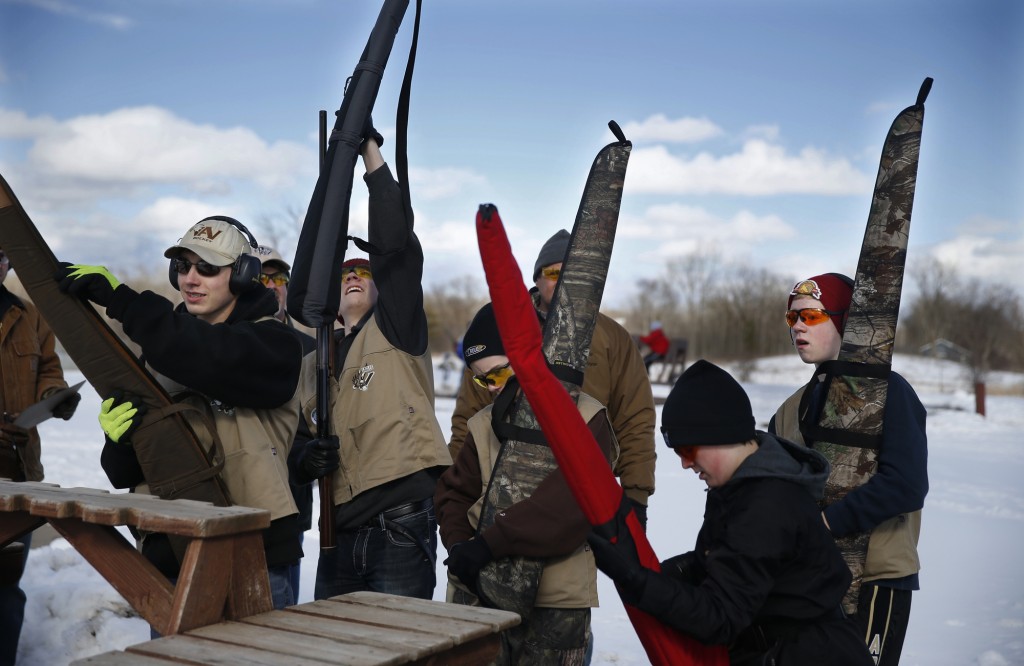 At Minneapolis Gun Club in Prior Lake, Apple Valley trapshooting club members put away their guns after shooting their quota.

Proponents of trap shooting as a school activity note firearm safety training is a prerequisite for competing and the league is accident-free since its inception 12 years ago. They point out that the league is gender-neutral, that students don’t need to be athletic to compete on their high school team, they receive the opportunity to letter and teams routinely get their picture in the school yearbook.

But not everyone is comfortable embracing the sport for schools. It is not considered a varsity sport but rather a recognized school activity.

“Trapshooting isn’t necessarily an activity that is for every school district,” Peterson said. “I think some people felt strongly about that, but I think there were also people who felt strongly that [we] left that decision to the school board not the High School League.”

New metro-area teams range in size from six members at the Math & Science Academy of Woodbury to Lakeville South’s 90-person team, Sable, the league’s founder, said in an e-mail. The average size among the 21 new metro teams is 32 members.

Apple Valley has 54 team members, up from 30 in its debut season last year. Each shooter tolerated the cold and wind for the chance to shoot at 50 clay targets, called pigeons, at the Minneapolis Gun Club in Prior Lake on April 15.

As gunfire crackled in the air, shells dropped into puddles created by melting snow. The shooters reflected a range of intensity; some sported heavy-duty leather hunting boots while others wore Uggs.

The sport attracts boys and girls and a diverse range of athletic abilities. Some compete in multiple sports — athletes can compete in another spring sport concurrently — but others say they wouldn’t be involved in athletics if not for trap shooting.

Bria Smith, one of the top shooters for the Eagles and in the state, said the sport is attracting more and more girls. “You wouldn’t really expect all these girls to be out here shooting and doing everything a guy can do,” Smith said. “I think it’s awesome.” Smith, a senior, said she plans to shoot in college.

Apple Valley’s Jacob Voss said he gets strange looks when he tells people he’s on the trap shooting team. He said they ask questions like: “You shoot guns? Where do you live?”

“Living in Apple Valley, a suburban city, it’s kind of a different sport to be offered,” Voss said. “I hope to see it evolve so people are more comfortable with the sport of trap shooting in the future.”

Teams compete once a week on their home range and rarely see their competition. Squads of five shoot from each of the five paved shooting slots and take turns firing at a clay pigeon, released from the trap house. Each shooter has five attempts before rotating through each of the five stations, for a total of 25 shots per round. Each squad repeats the process, and reports individual scores out of 50 to a website that compiles stats for the season.

Trap shooting’s recent growth recalls lacrosse a decade ago as it rallied for full MSHSL incorporation. But Sable said the presenting partnership is probably as far as the relationship will go.

“I think we’re exactly where we want to be,” Sable said. He said it was important to the CTL to continue to host its own year-end tournament to reward shooters at the novice and junior varsity levels, in addition to the state’s elite. What’s more, the MSHSL does not allow competition on Sundays and with limited gun club availability, the league prefers to keep Sunday shooting an option.

Derek Wetmore is a University of Minnesota student reporter on assignment for the Star Tribune.