Logan Rennemo (front) eyes a target while teammates Dillon Reed, Brandon Lockner and Kyle Hanson look on during Lake of the Woods School clay target practice Tuesday, April 2 at the Lake of the Woods Rod and Gun Club south of Baudette.

It probably wouldn’t have taken much of an imagination to imagine it. At least not for the hunters in the group, which includes about every member of the Lake of the Woods School clay target team.

A handful of the school’s shooters took their turns at the blaze-orange, fast-flying clays during the team’s first practice Tuesday, April 2 at the Lake of the Woods Rod and Gun Club just south of Baudette. The shooting range was mostly snow-covered, and with the occasional patch of dirt and mud, it looked more like the fields that surround this out-of-the-way place. Maybe a possible landing spot for a goose or two – the spring light goose season runs through the end of the month, after all.

Maybe prior to Tuesday. The sounds of gunshots tend to make wildlife of all sorts a bit skittish. But here, off the muddy backroads about four miles south of Baudette, if you’re a hunter, you can picture it. And that might just bode well for the LW team this season.

Clay target shooting is regarded as the fastest-growing high school sport in Minnesota, with more than 100 teams from the metro to Lake of the Woods competing this season. And that hunting is a way of life here in rural Minnesota, many of the LW team members have shotgun-shooting experience. Clay target shooting is a bit different, though. You don’t have to be a hunter to excel in the sport and hunters aren’t necessarily any better at it than non-hunters.

But for LW, that experience can’t hurt. Nor the fact that the team has a year under its belt in the sport, has most of its top shooters back and 50 percent more shooters than a year ago.

“We saw great improvement last year and we are hoping to build on that as we only lost one person in our top five from a year ago,” said Bob Laine, who is coaching the team along with Matt Grover again this season. “I don’t remember how we finished last year – we were near the bottom, but really showed massive improvement for the year.”

“Top returners for us will be Dillon and Logan Reed and Brandon Lockner,” Laine said. “All three shot around 35/50 at the end of the season last year. I am hoping for 40s from them this year.”

Minnesota State High School Target League competition is “virtual” – scores are submitted and compared with other schools’ performances to determine earned points for a team and then posted on the league’s website, according to the MSHSCTL. A true team scoring system is used in three shooting performance categories – top score, top 50 percent performer’s average score and overall team average score.

The number of shooters on a team is used to define the sections within the MSHSCTL. LW competes in 3A along with Glenville-Emmons, Holdingford, Kelliher, Litchfield, Proctor, Southwest Christian and St. Thomas Academy. 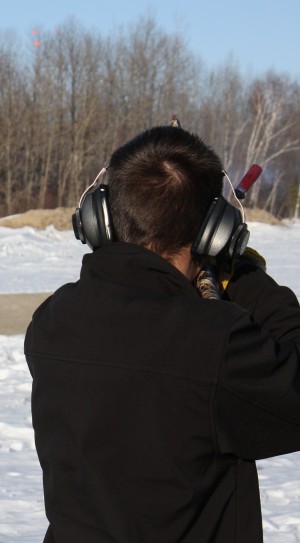 “Since our section covers from the Iowa border (Glenville-Emmons) to the Canadian border (us) we send in our scores to the Minnesota Clay Target website,” Laine explained of competition in the shoots. “Our official shooting day is Saturday so we have to put in scores by 6 p.m. on Saturday. Scores are compiled and updated on the website by Saturday at 9 p.m.”

Tuesday kicked off four weeks of practices for the team, with a rainout shoot scheduled that third week – “This score is only used if we have a rainout on a shoot day,” Laine said – and the first official shoot set the week of April 22, also a 50-bird event. All are at the Lake of the Woods Rod and Gun Club.

“Our practice days may vary week to week due to our sports schedules but they are mainly on Thursdays or Fridays,” Laine said, referring to the fact that some members of the team also participate in other spring sports at LW, which is possible with the flexibility that the clay target league offers.

Under Grover’s watch, a handful of shooters participated in that first practice Tuesday. Besides dealing with chilly temps, Grover was constantly trekking through the snow to the traphouse to tinker with the trap, which – maybe because of the cold – wasn’t cooperating.

“The weather is supposed to be a little warmer the rest of the week so I hope our shooting will get better and we will have fewer problems with the trap machine,” Laine said following that first practice.

The season runs through early June, culminating with the state tournament at Alexandria Shooting Park in Alexandria on June 7-9. Last December, the Minnesota State High School League approved a partnership with the clay target league for a state tournament in June 2014, which will make Minnesota the first state with a high school-sanctioned state trap tourney.

This year, the league boasts 114 teams representing 195 schools with 3,400 participants, according to the MSHSCTL. It is open to students grades six through 12 who have earned their Firearms Safety Certification. According to the league, it has three priorities – safety, fun and marksmanship, in that order.