With just one year of high school competition under their belts, you would think that Alexandria clay target shooters would still be learning the ropes.

In just the first year as an organized high school sport, the Jefferson High School clay target team claimed the 1A Conference championship, then moved on to take fifth at the state tournament in a field of 57 teams.

They will adding a large number of competitors to their squad for its second year, giving the coaching staff many options.

“We have 26 new clay shooters trying out this year,” said coach Scott Green, “many that I have never seen shoot before. It appears that we have plenty of good new talent and good numbers spread throughout grades 7-12.

“We only have two female shooters and hope more come out next year, as this is a co-ed sport where female and male athletes compete head-to-head.”

Alexandria’s team, which moves to the 9A Conference this season along with Andover, Edina, McGregor, Montevideo, Nicollet, Plainville-Elgin-Millville and St. Louis Park, probably has a step up on its competition with the Alexandria Shooting Park at its disposal, which is where the state tournament will be held again this season.

“I believe the team to be very strong, and having the biggest and best trap field in the state to train on will help,” said Green. “Also having home field advantage will help the team’s performance during the State Team Shoot in June.”

This spring’s weather has been a problem for shooters all over the state as they try to get in their practices before the actual starting date of Sunday.

“It’s hard to tell what the competition will be this year, as with all the snow, it’s hard to get the scores in from other areas of the state,” said Green. “We do know it is the fastest growing high school sport in the state this year.”

Last year, there were 57 teams in the league. This year, squads have doubled to 114 with more than 3,400 athletes on the 2013 rosters around the state.

“On this year’s Cardinal team, we have a roster of 31 shooters, while we had six last year,” said Green. “We are excited by the growth and interest in the sport and are looking forward to an exciting year.” 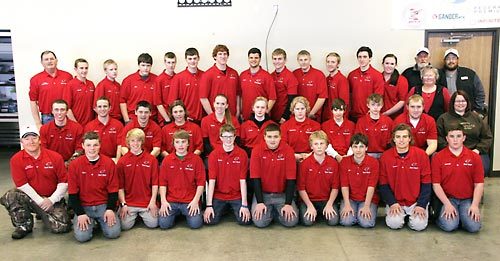