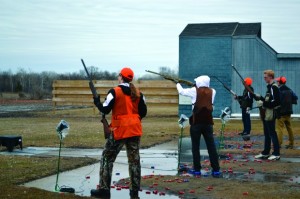 Eden Prairie trapshoot team members take aim during a practice last week at Minneapolis Gun Club in Prior Lake. The team of seventh- through twelfth-grade students has more than doubled since it started three years ago. (Sun Staff photo by Natalie Conrad)

“Our team has seen a lot of growth and I think we have almost reached our limit,” Coach Joel WasDyke said. “We have had a fair amount of improvement from the start and I expect the team to do even better this year.”

The Minnesota State High School Clay Target League announced that 114 high school trap teams representing 195 schools and 3,400 student athletes would be participating in the 2013 spring season. When the Eden Prairie team started, there were just 18 members, this year 44 students came out for the sport made up of boys and girls grades 7-12.

Led by the support of their schools and hundreds of volunteer coaches, thousands of student athletes will be trapshooting weekly in April and May at shooting ranges throughout Minnesota. And recent nasty weather does nothing to hinder the Eden Prairie team that practices Tuesday nights starting at 4:30 p.m. and goes until dark down at the Minneapolis Gun Club in Prior Lake.

In a time when gun control issues are a controversial topic, these students, are learning safety and accuracy with some of the top gunmen in the area. The six coaches bring a total of more than 80 years of experience in the field. WasDyke brings more than 20 years of trap shooting experience. Coaches Cal Munkvold, Al Horner, Roger Pasch, Burt Boudreax, Scott Nelson and Jon Pogatchnik all have experience as sporting clay competitive shooters, and several also serve as firearms safety instructors or have previous experience coaching or teaching shooting techniques. 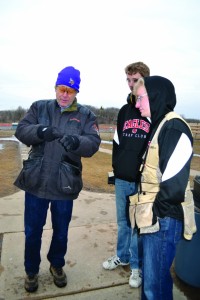 Many of the team members have backgrounds in hunting or scouting, so this is certainly not their first experience using a gun. Still there are some newbies to the firearms arena, but they quickly learn important skills and safety from experienced coaches and teammates. To join the team, students must have earned their Firearm Safety Certification. So they learn the basics of gun safety long before hitting the shooting range.

“I feel safer with these kids than any other person off the street,” WasDyke said. “I would be happy to be in their company on the shooting range any day.”

And the safety training taught in this competitive sport has been paying off. There have been no reported injuries since the Minnesota league’s inception in 2001.

Besides safety, some of the other lessoned learned from the sport are similar to many other school sports and activities: patience, perseverance, discipline, hand-eye coordination and teamwork.

“One of the biggest things I’ve learned is patience,” Sophomore Michael Watras said. “Even when it gets tough or frustrating, you can always improve.”

Like swimming and track, trapshooting is an individualized team sport. This gives students the opportunity to work towards both individual and team goals. Senior and second year team-member Aaron Halpin finds the sport a nice contrast to his other favorite sport, soccer.

“It’s a lot of fun and it’s only one day a week so it’s not a huge time commitment,” Halpin said. “It’s definitely a change of pace.”

The numbers of athletes on a team are used to define the conferences that teams compete within. Scores are submitted and compared with other school’s performances to determine the earned points for a team and then posted on the League’s website. The season culminates with the State Tournament at Alexandria Shooting Park in Alexandria, Minnesota on June 7-9, where individual and team champions will be determined and recognized.

As the sport has grown, awareness has also spread throughout the community, but much of the student body is still learning about the new sport.

“When we wear our trapshoot sweatshirts, people are still confused, but the interest is definitely growing,” Halpin said.