Delano’s Timmy Kraemer fires at one of the clay targets April 8 during a practice with the Delano Tiger Trapshooting team. This is the first year of the team, which has 29 members. In 2014, the Tigers and all other high school trapshooting teams will join the Minnesota State High School League, when the league officially adopts the sport as a sanctioned activity.

In the spring of 2014, the Minnesota State High School League (MSHSL) is adding trapshooting to its list of sanctioned activities, and Delano will be involved.

Delano will be one of more than 100 teams in the league, which will earn its competitors varsity letters and end each June at a state tournament. In preparation for the 2014 season, Delano approved of a team for this fall. The current Tigers will compete in the 12-year old Minnesota State High School Clay Target League (MSHSCTL), which is considered more a club that still warrants varsity letters for qualifying shooters.

To say the new club in Delano was popular is an understatement.

“We have 29 kids on the team and we had to turn down another 50,” said Desiree vanSytzama, president of the Delano Shooting Sports Club, the organization that supports the Delano trap team.

Out of fairness to those totally committed to the trapshooting team, interested shooters who were already involved in a spring sports were turned down. The cuts were due simply to the lack of time and space. 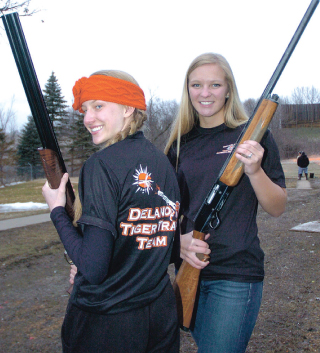 The Delano Tiger Trap team isn’t just for the boys. Sophomore Kalley Johnson (left) and Kailyn Warne are two of the three girls on the team. Johnson is an established archery hunter who wants to learn how to gun hunt, while Warne is a veteran of gun hunting who wants to better her shooting skills.

The Tigers’ home range is the Delano Sportsmen’s Club, which has been a big help in getting the club going.

“The sportsman’s club has been a huge help, giving us a day to shoot and some sponsorship funding to get this going,” said vanSytzama.

The Tigers shoot Monday nights, rotating teams of five shooters, left to right, through the five spots on the crescent-shaped formation that sits 16 yards behind the remote-controlled machine that launches the clay pigeons in random directions. As soon as the previous shooter’s spent shell pops out of the gun’s ejection port, the next shooter in line loads his gun, pops off the safety, readies himself and yells “pull.” A second later, a four-inch orange clay disc soars away from the shooter, who takes aim and squeezes the trigger. Some targets explode when the spray of the trap load connects, and others fly off untouched, eventually landing in the distant carpet of fellow clays.

The Delano team began practice April 1. The Tigers will treat this Monday (April 15) as a competition so it can be used as a makeup day if needed. Officially, the competitive season begins Monday, April 22. The spring season concludes locally with a celebration June. 3, and the state tournament is June 7-8 in Alexandria. All are welcome to watch the competitions.

The Delano Sportsmen’s Club has picnic tables and benches and an indoor facility near the range for onlookers. Each team shoots at its home course and submits the scores to a central website. The scores are then compared to the other teams in the conference. During competition, each shooter will shoot two rounds of 25 shots. How many clay targets hit out of 50 determines each shooter’s score for that night. The top shooter for the night is considered the “Top Gun” and that score is worth one-third of the team’s overall score. The average score of the five competition weeks determines the level of each shooter. Those who average 19-25 targets are varsity; 15-18.9 targets are junior varsity; and 0-14.9 targets are novice.

In the first two weeks of practice, Delano’s big shooter has been junior Zeb Mayers. He thrilled everybody with a 21-for-25 showing the first night. “He is definitely our top gun. He has a lot of experience and is an excellent shooter,” said vanSytzama. “It was pretty awesome to see that.”

Delano’s interest in trapshooting coincides with the state-wide interest in the sport in recent years. In the first eight years of the MSHSCTL (2001-08), three teams and 30 athletes were involved. The numbers went up to six teams and 60 athletes in 2006, and, to day, the MSHSCTL web page

(mnclaytarget.com) promotes that 3,400 student athletes from 215 schools will shoot on 114 trapshooting teams in 2013. The shooters must be at least 12 years old and in grades 6-12. Boys and girls compete together using 12 or 20 gauge shotguns.

Delano’s 29 shooters range from sixth grade to a senior, and includes three girls. All have completed the mandatory firearm safety course. Each Tiger member paid $147, which is lower than many other team fees. The fees cover the costs of clay targets and ammunition.

“They may not be the best athletes who jump the highest and run the fastest,” said vanSytzama, whose son Carson is a seventh-grader on the team and whose husband Brad vanSytzama is a coach. “There are a lot of kids who breathe hunting and fi shing and I think this gives them an area of passion.” The mix of shooting backgrounds makes up the Orono team, which joined the MSHSCTL in 2010.

“We have kids who don’t hunt or who hunt and haven’t shot trap, to kids who have shot trap for years,” Orono coach Mike Personius said. “In shooting sports, you don’t have to be a superstar athlete to do it. You don’t have to be the best academic athlete either. Just about anybody can do.”

The Spartans were the 11th team to join the league, which had a total of 250 kids at the time.

“The first year we had 15 kids and this year we had to cut off at 40. I think we could have had 70 kids,” said Personius, who owns Chunk’s Automotive Service in Long Lake.

“It is growing by leaps and bounds.” Personius says welcome to the Delano team. 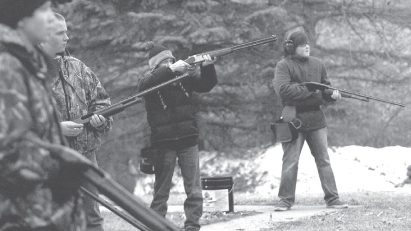 Alex Andreae squeezes off a shot with teammates (from left) Timmy Kraemer, Zeb Mayers and Chad Roberts watching. Mayers hit 21 of 25 targets on the fi rst day of practice April 1. He will vie for the team’s Top Gun honor this year.

“The more the merrier,” he said. “Every year I’ve been in the program, it has doubled.” For many of the Tigers, the trapshooting team was a way to further sharpen their marksmanship in hopes it will pay off when the ducks, geese, grouse and pheasants start flying again.

That’s why Ryder Shallbetter, the lone senior on the team, joined.

“I just thought I like hunting and I like shooting so I thought why not give this a try,” said Shallbetter, who hunts with his dad and brothers, and has participated in the Delano Area Education Foundation the past five years. “You learn the motions to go through on how to shoot the targets, so it is good experience for when you are out in the field.”

Junior Kailyn Warne, one of the three girls on the Delano team, also appreciates the extra experience the trapshooting team will give her.

“I haven’t really been able to do anything with (hunting) in the offseason so this is a good offseason activity — to keep practicing so I am ready,” said Warne, as the pop of a shot echoed through the range in the background. She enjoys the idea of shooting for a team while trying to make herself better.

“It is great that it is an individual sport as much as it is a team sport. I can improve myself and also the team can improve as a whole and each year make our mark in the state,” she said.

Warne took gun training in sixth grade and started hunting a year later. She is a veteran hunter of deer, turkey, duck and pheasant, and is quite comfortable handling a long gun.

Sophomore Kalley Johnson is also a veteran hunter, but she is just getting used to fire a gun. Her background is in archery, which she picked up as a 10-year old.

“I am an archery hunter but want to become a gun hunter so I thought this would be good practice to become better,” said Johnson.

For sophomore Chad Roberts, the competition attracted him to the Delano team. “My whole family has always been into hunting and guns. I have been out range shooting and trapshooting in my backyard, and when I heard about this I got really excited because I love trapshooting. I love shooting,” he said. “I thought it would be really fun to come here and compete against other people. It will be a good learning experience. I want to get better at trapshooting so I can show off to my family.

“It’s more fun to do it as a team because you have other people you can compare yourself to and work with.” The team aspect of the sport has been seen early at practices. “Right out of the gate, when they are done shooting they can go home but a lot of them stayed around to watch the other kids shoot,” vanSytzama said. “Everybody is just really enjoying it.” Helping the shooters improve are five volunteer coaches.

“There are a lot of coaches who stand behind you when you shoot, and when you make a mistake someone will be right there to help you,” said Warne. “You get better each week.”

Steve Brown, whose son, Sam, a sixth grader, joined the team this year, is impressed with the club.

“As a parent, I have been impressed with the leadership involved. The coaches have clear priorities and a genuine interest in the sport and the kids. Specifically, the focus on safety, enjoyment and learning has been very evident.”

The 114 teams in Minnesota are split into 15 conferences. Delano will shoot in Conference 8A with Bethlehem Academy, Centennial, East Ridge, Hermantown, Lac Qui Parle, Sibley East and Waconia.

Shallbetter, who also plays soccer at Delano High School, wishes he had another year of eligibility after this season so he could compete in the high school league. “It’s unfortunate that I would be around next year because this year it is only a club sports but next year it is going to become a validated school sport. That will be good for the state of Minnesota,” he said.

The number one priority is safety. These kids are not using weapons even remotely close to what is being used (in those cases),” she said. “There is a safety coordinator out here. One safety violation gets a warning, a second gets you kicked off the team. We take this very serious. “The league has not hidden from any of the incidences and said this is what we are doing,” said vanSytzama.

The community has been nothing but positive in welcoming a trapshooting team to Delano. “I think this community is based on the love of hunting and fishing and they know what this is all about,” she said. “The Delano Sportsman’s Club has been here for years and years. I think they get it.” Brown gets it, and that’s why he signed up his son, Sam, for the team.

“He is a kid who really enjoys the outdoors and being in the woods. That is one of the main reasons he wanted to join trapshooting. For him, there is a connection between the outdoors and shooting, so I think that really peaks his interest,” Brown said of Sam, who has deer-hunting experience. “This is just another opportunity for youth to be involved and connected. I really believe that as a community, whenever we get kids involved and connected it is good for their development.”

The addition of trapshooting in 2014 will run Delano’s total of MSHSL-sanctioned activities to 28 (including co-ops). Trapshooting’s inclusion will come on the heels of Delano adding boys and girls lacrosse this spring.