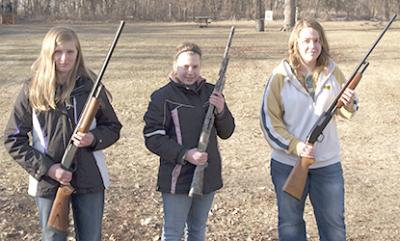 The three girls on the GSL trap team pose with their shotguns. From left: Morgan Bernstein, Katelyn Dammann and Sam Johnson.

The first-ever GSL trap shooting team will participate in the 2013 Minnesota State High School Clay Target League (MSHSCTL) this year.
The team is lead by head coach Doug Fegley of Stewart.
Fegley has been teaching firearm safety courses through community education at Shady Lanes Sportsmen Club, south of Glencoe, for approximately 10 years.
At a time when the words “gun” and “school” evoke a wide array of emotions, Fegley said the feedback he has received has been good.
“The community has very much welcomed what we’re doing here,” Fegley said. “The majority of feedback that I have heard has been good … we’ve had an excellent response from different groups and stores within the community. They’ve raised about $5,000, which helps pay for ammunition and range fees.” Some of that has also come from concession sales and GSL Panther Booster club donations.
While the community seems to be in favor of it, the kids have responded well simply in the number of participants.
“Last summer we did a test run and had a sign up for the program,” Fegley recalled. “We were showing 10-15 participants, 20 at max. On Feb. 25, we had 33 students signed up, which is awesome. It shows the school board that there’s a lot of serious people thinking about this, and we’re trying to give a new view of an athletic sport.”
Fegley hopes that trap shooting will gain recognition by the Minnesota State High School League (MSHSL) in the coming years, to offer kids another form of competition at the high school level.
“Teaching firearm safety, I always get asked the same question: ‘What can I do after I pass the class?’” Fegley said. “This allows kids who have completed firearm safety to use knowledge gained from the class toward hunting or the lifelong sport of shooting clay pigeons.”
Currently, the sport is in a two-year probation period with the MSHSL. It will go in front of the board in 2014 and could possibly be recognized as a varsity sport.
For more, check out this week’s issue of the Chronicle.

Perfection has its privileges.
Taking aim at a new sport