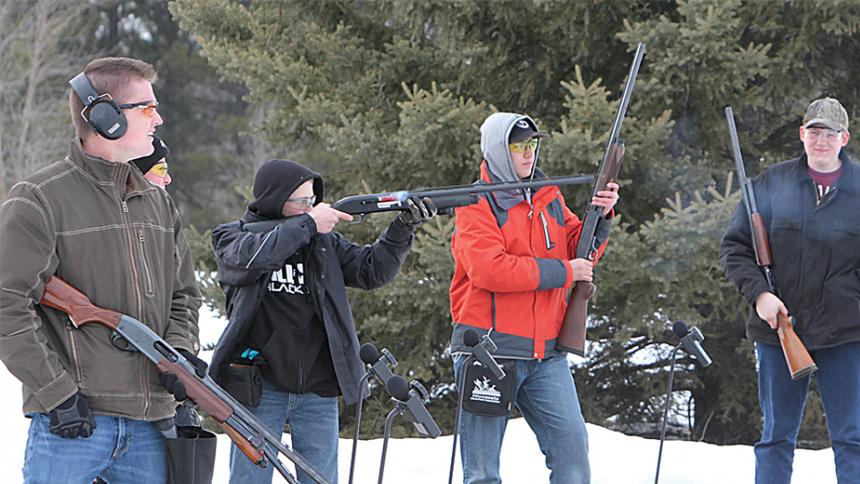 A group of trap shooters stand on the line waiting their turn to shoot during Tuesday night’s trap shooting at the Becker County Sportsman’s Club. Brian Basham/Tribune

Detroit Lakes High School students are taking a shot at a new sport.

“Pull!” they yell loudly just seconds before taking aim at the painted clay pigeon that’s hurled into the air.

Davis is among 17 students from Detroit Lakes who make up the district’s new team of sharp shooters — or so they strive to be.

“When you miss, it’s operator error … you can’t blame it on the gun,” laughed 18-year old Brandon Johnson as he prepared to go a round out at the range owned and operated by the Becker County Sportsman’s Club.

Three of the club members are volunteer coaches who assembled the first-ever Detroit Lakes team to compete in the Minnesota State High School Clay Target League.

It’s an organization that started only six years ago with a mere three teams.  The next year it had six, the year after that it went to 13 teams, then 29, then 58 and this year there are 114 teams of 3,400 Minnesota students who have this new sport in their sights.

“You’ll have your bad rounds where it seems like you can’t shoot anything, but then you’ll have those where you hit a lot of them,” said 17-year old Micah Calderon, who has also grown up hunting, particularly ducks.

Calderon, like the others on the team, has his gun safety certification – a requirement to be on the team.

“The biggest thing we teach them is safety,” said Shawn King, one of the volunteer coaches for the Detroit Lakes team, “and then we also want them to improve and feel better about their scores, so we work on shooting stance, keeping their heads down and hitting the birds.”

They began their season last week with evening practice.

Students bring their own ear and eye protection and guns, typically 12-gauge shotguns.  “But they cannot bring them to school,” stressed Nodsle. “They have to leave school and go home and get them before coming to practice or have their parents bring them, but they cannot be on school grounds with them.”

The students will practice for three weeks before competition starts when the young marksmen begin competing against a handful of other teams in their conference.     “They’ll shoot the rounds here,” said Perry Nodsle, board member of the Becker County Sportsman’s Club and volunteer coach.  “They call it ‘virtual trapshooting’ where they’ll shoot and then we’ll go onto the website and enter the scores … that’s how they compete against the other schools.”

Nodsle says entering the scores is based on honesty, as “it wouldn’t do much good to cheat and then send the kids down to state and they can’t hit a thing.”

State competition is in Alexandria June 8 and 9 – an  event every single trap shooting team in Minnesota gets to compete in, whether a sharp shooter or novice as they are set up to compete against the same caliber students.  They compete both on an individual and a team basis.

“I think it raises their confidence levels,” said Nodsle, “You can have a handicapped kid in a wheel chair compete against the captain of the football team and be on an equal basis. We’ve got a few kids here that are running in track, a couple on the golf team, and we’ve also dipped into a group of kids who would not be in sports if this was not a sport.”

Nodsle says when they first put the word out about the new team, they had 80 students from Detroit Lakes sign up … a number that seemed overwhelming to the coaches at first.  “But only 17 showed up, and I think that may have something to do with the cost,” said Nodsle, adding that each student had to pay $300 to participate.

That money is sent to the school, which handles the finances including entry into the league. The Becker County Sportsman’s Club purchases the ammunition and targets, then bills the school.

Nodlse says it’s a possibility that they may open up the team to other schools like Frazee next year, but this year it was too much of a rush to pull it together in time for the entry deadline, as each school board has to give its approval.

But before even thinking about increasing membership for next year, Nodsle believes the team and club are going to have to do some fundraising to bring those fees down to a more affordable level.

Hawley students will also be traveling to the range three miles east of Detroit Lakes for practice, although as a separate team.

“It’s maybe kind of selfish on our part because we’re trying to bolster our game,” said Nodsle of his volunteer endeavor.  He laughs that so many of the club’s members are “old guys,” but is serious about wanting to make sure they teach area youth the love of the sport so that they can carry it on throughout their lifetimes.

“We want to get the young kids interested, but if you don’t show them how to play, they won’t come,” said Nodsle, who says he knows the kids are already enjoying the “game.”

“They’re out there freezing right now, shooting and having a good time,” he said, “and that’s what it’s all about.”