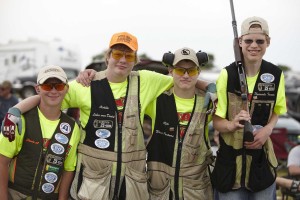 Camden Korwin-Kuczynski got a few pointers from his trap shooting coach, Steven Weagel, before his meet Sunday, April 22. Those pointers and Korwin-Kuczynski’s love for shooting paid off as he shot a perfect 25 out of 25 clay pigeons in his second round of shooting Sunday.

Korwin-Kuczynski and teammate Austin Stockman tied for top gun, each hitting 44 of 50 targets.

Trap shooting is the newest team sport to be offered in Pine River-Backus and Pequot Lakes high schools. Headed up by Weagel, DNR conservation officer Nikki Shoutz and Pine River Fish and Game Club owners Darrell and Tracy Wolkenhauer, 23 students have joined the combined team from both high schools.

“Trap shooting’s like practicing for duck hunting,” said Korwin-Kuczynski, a 10th-grader at PR-B.

Korwin-Kuczynski hunts ducks and deer, and said his favorite part of being on the team is both being outdoors and, simply, the shooting itself.

Many, if not all, of the 23 team members are also hunters. Weagel made it clear to his team before the meet Sunday, though, that trap shooting is not the same as hunting.

Trap shooting requires a different stance than what is often used in hunting. Weagel coached the students on where to place the butt of the gun on their shoulder, foot placement and posture.

The coaching paid off, Weagel said, as many of the players improved from the reserve scores they’d shot the week before.

Trap shooting is an Olympic sport. The high school team is shooting 16-yard trap, the standard. Five shooters take their place in a line behind the clay pigeon thrower. Taking turns, they yell, “Pull,” into short microphones that trigger the thrower.

A judge sits on a platform behind them. He shouts, “Loss,” if the pigeon is missed or is not adequately broken.

The shooters change position in the line as they go, so each team member shoots from each spot in line. Each player gets to shoot two rounds of 25 pigeons, making his final score out of 50.

Shoutz is excited for the team. She coordinated much of the fundraising, aiming to keep the cost of being on the team the same as the cost of any other high school sport.

Shoutz was overwhelmed by the amount of public support for the team. Each of the team members has a shooting vest with his name on it as well as the name of a sponsor. Some vests had to have two sponsors because the team received more sponsors than team members.

Weagel calls trap shooting “a game of consistency and discipline.” He said shooters must practice until they mount the gun on their shoulder the same way every time and have the same view of the field every time.

He said it’s important that players don’t react emotionally to missing a target. They must shut everything out and keep from getting distracted while shooting.

He also stressed the importance of etiquette. There’s no talking while standing at the line, players need to stay relatively still, and there’s no picking up spent shells while others are shooting. Bending over means swinging the gun, so it’s kept to a minimum.

Of the 23 shooters on the team, 17 are PR-B students and six are from Pequot Lakes. The team will compete against other schools in its conference, which includes Nicollette, New Prague, Sibley, West St. Paul, Farmington and St. Louis Park. Conferences are formed by the number of players on the team.

The top five shooters are named varsity, the following five junior varsity and the remaining members of the team are novice. The average of all shooters’ scores form the team average. This week the team scored 36.

The trap team competes every Sunday at noon at the Pine River Fish and Game Club.

Trapshooting: The next high school sports sensation?
VIDEO: Coaches talk about the League