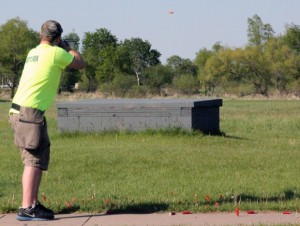 Now, these kids aren’t a gang of felons set to rob a bank or threaten rivals with serious harm.

These kids – 13 of them girls – are members of the inaugural BHS trapshooting team and their playing field is the Metro Gun Club, located at 10601 Naples St. N.E., Blaine.

Many of them have never participated in team sports, never worn a Bengal jersey, never competed for a championship trophy. But when the opportunity came to become members of the BHS trapshooting team, they figured they’d take a shot at it.

“This is something different – unique – and it’s fun. That’s why I wanted to be part of it,” said sophomore trapshooter Luke Lemire.

Matt Fox, a junior on the BHS trapshooting team, said he joined because he likes “to do anything that has to do with hunting.”

In competition, each shooter fires 25 shots at 25 birds (clay pigeons) launched over the Metro Gun Club trap field. There are two rounds of shooting, and so a perfect score is 50: 50 birds hit with 50 shots.

But teen trapshooters learn more than just how to take aim, said BHS trapshooting coach Larry Osmek, a science teacher at the school.

“It’s about life… the ups and downs,” Osmek said. “With practice and perseverance, focus and concentration, as these kids are learning to trapshoot, they are practicing skills they can use in life: perseverance, focus, diligence,” he said.

“There’s so much skill involved in trapshooting and those skills are life skills, too.”

BHS trapshooting team is coached by head coach Osmek and a team of trapshooting enthusiasts, many of them members of Metro Gun Club’s shooting leagues.

Kathy Lahti is one of the volunteer coaches who said the trapshooting team members are “learning to be safe, they’re learning respect, ethics, teamwork. There are so many skills these kids are using, so many skills they can use throughout their lives,” she said.

For the BHS trapshooting team members, another advantage of being part of the team is of the social variety.

“It’s just fun to get out here with these guys and shoot. It’s a great atmosphere and everyone helps each other. I love it,” said sophomore trapshooter Maddy Rancour.

To shoot for the BHS team, students must first earn their hunter education certificate and pay the $198 registration fee, a fee which covers the cost of shotgun shells and clay pigeons.

While most of Blaine’s trapshooters use their own shotguns, Osmek said students can rent a gun from the Metro Gun Club, if necessary.

“Most of them have their own shotgun, their families are hunters, so they’ve already got guns,” Osmek said.

With Minnesotans’ love of the outdoors, a trapshooting team fits many students’ “enthusiasm for the great outdoors,” he said.

Shooters on the BHS team range from novices who have never shot before to very proficient, and they all practice and compete during the nine-week trapshooting season.

The league’s state tournament is set for June 9-10 at Alexandria Shooting Park in Alexandria.